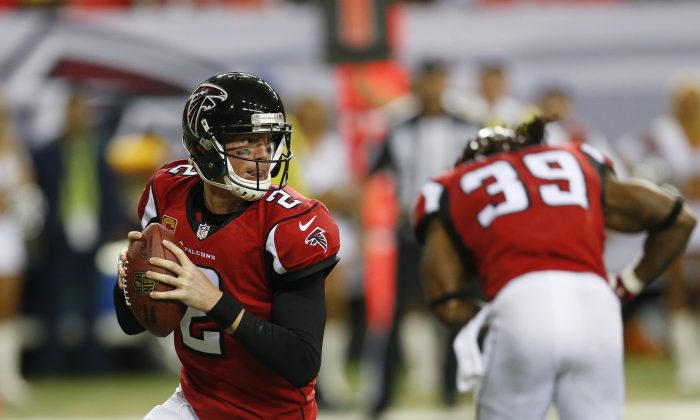 The Atlanta Falcons play the Green Bay Packers on Monday night. Here’s some of the latest updates.

Unless the Falcons make a deep playoff run, it’s inconceivable that Mike Smith would come back next season.

Now, a report this week from the New York Daily News is saying that Smith’s future looks bleak.

The News’ Manish Mehta reported that when coach Rex Ryan “gets fired by the Jets after this miserable season, he could be flying south for the winter… and spring and summer and fall. Ryan might trade in a closet full of green-and-white gear for some red-and-black merchandise with a new motto: Play Like A Falcon.”

He cited a source close with Falcons owner Arthur Blank for his information.

“Arthur wants a tougher team,” the source told Daily News. “He wants guys that have an edge to them.”

The source added that even if the Falcons make it to the playoffs, “I think Smitty’s fate is sealed.”

The only issue with that narrative is that Ryan likely will draw considerable interest from other bottom-dwelling teams as either a head coach or defensive coordinator.

“I believe Arthur will hire the next coach, not Thomas,” the source also noted, referring to GM Thomas Dimitroff. “That’s if he even keeps Thomas.”

QB Matt Ryan has his work cut out for him at Lambeau Field on Monday night.

However, he said that he’ll be OK with the cold weather.

“Oddly enough, last year in Green Bay,” Ryan said, per ESPN. “That was about as cold as I’ve ever been. … Hopefully it will be a little bit warmer this time when we go up.”

“We’re kind of spoiled on the NFL: On the sideline, it’s actually pretty warm,” he added. “You got the benches that pump a lot of heat out so you can stay pretty warm on the sideline. I think when you get out on the field, you can’t think about it. Everybody’s going to be cold out there. You don’t worry about it. You just go out there and try and play like normal.”

WR Julio Jones said that the Monday Night Football game against Green Bay is an excellent opportunity for the team.

“I just got to go and do it again,” Jones said, per AtlantaFalcons.com.

“The hardest thing is to keep doing it. Doing it again and doing it again. People praise you. A lot of people gave up on us early on, and this season hasn’t been going like we wanted it to. Here at this organization, we just have to believe, and we just have to keep going.”

Last week, Jones caught 10 balls for 189 yards and a touchdown.

“You just got to go out there and show the world how good you are,” Jones said. “Everybody’s watching you. There’s only one game on TV. We’ve always been underdogs, this whole year. As long as we do what we do, and to the best of our ability, we’ll be happy at the end.”