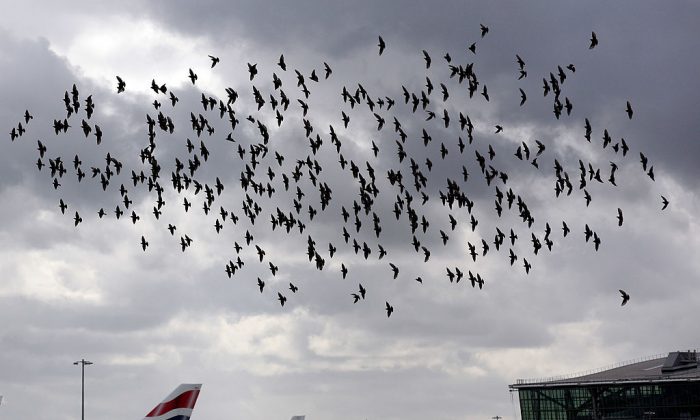 A flock of starlings fly past the tail fins of British Airways planes. (Photo by Dan Kitwood/Getty Images)
Careers

A dream job for all hunters, marksmen, and anybody who likes to work with firearms was posted in Georgia. The Hartsfield-Jackson Atlanta International Airport is seeking people to shoot animals that get in the way of aircraft. That is how The Atlanta Journal-Constitution interprets the firearm requirement for the Airport Wildlife Biologist position posting issued by the city of Atlanta.

The assessment appears accurate, especially if viewed from the requirement to “Maintain firearms proficiency at least annually through NRA Basic Pistol, Rifle, and Shotgun.” This isn’t a police or security position, and animal strikes are a serious threat to airplane safety.

The Aircraft Owners and Pilots Association (AOPA) talks about all the damaging things animals can do to aircraft. Some collisions with birds have even resulted in death. Deer and coyote are the biggest land-animal problem. Animal collisions cause damage to airplanes that results in $330 million in repair work for the aviation industry each year.

The severity of the problem at airports is probably why the position pays $50,900—$67,800 a year. The Federal Aviation Administration tries to keep animal habitat away from airports to prevent collisions in the first place, according to the FAA website. The FAA also works with the Feather Identification Lab of The Smithsonian in order to identify bird species from their remains after collisions.

A large bird that enters the engine of a plane in flight can shut it down. Plane engines started to be tested for capacity to ingest birds without stopping in the 1950s. The most dangerous birds for pilots are the larger ones, and ones that may not be large but travel in large flocks. The AOPA recommends keeping the windshield heated during cold weather to reduce the chance of shattering in case of a bird hit.

The FAA maintains animal strike-reporting guidelines. Although submission is still voluntary, reporting supplies valuable data that informs future measures. A good marksman, as the job posting suggests it is looking for, could save the lives of people in aircraft as well as aircraft damage. The FAA has not specifically identified what role a firearm will play in the job, and it probably isn’t the main focus of the position, but it could obviously be helpful in the course of planning animal management for safety purposes, or when stumbling upon animal habitat located near the airport.