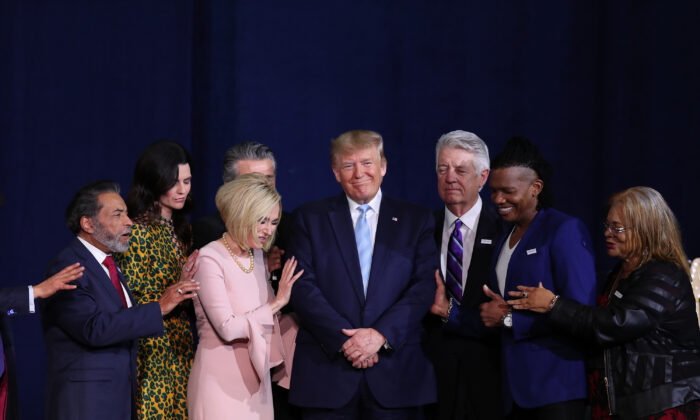 When religious leaders and other evangelicals gathered Jan. 3 at a Miami-area megachurch for the Trump 2020 campaign’s first “Evangelicals for Trump” rally, they did so amid the threat of an IRS investigation of the congregation’s tax-exempt status.

President Donald Trump met with the group at the King Jesus International Ministry in suburban Miami. The Apostolic church, thought to be one of the largest Hispanic congregations in the United States, is led by Pastor Guillermo Maldonado.

When the event was announced by donaldtrump.com, the Freedom From Religion Foundation (FFRF) quickly asked the federal tax agency to determine if hosting the rally on church grounds violates its 501(c)(3) exemption.

The exemption, which covers charitable and educational foundations as well as churches and ministry organizations, allows supporters to deduct 100 percent of their contributions from their federal tax liability.

“In urging congregants to come to a political rally and in hosting the political rally, King Jesus Ministry appears to have inappropriately used its religious organization and 501(c)(3) status to intervene in a political campaign,” FFRF Legal Director Rebecca Markert said in a Dec. 31, 2019, letter to the IRS.

“It violated IRS regulations by seemingly expressing its support for a candidate in the November 2020 election,” Markert wrote. “FFRF respectfully requests the IRS commence an immediate investigation into King Jesus Ministry’s violation of IRS regulations prohibiting 501(c)(3) organizations from participating in and/or intervening in a political campaign.”

The Madison, Wisconsin-based FFRF, founded in 1978, describes itself as an association of “30,000 free-thinkers: atheists, agnostics and skeptics of any pedigree,” that “works as an umbrella for those who are free from religion and are committed to the cherished principle of separation of state and church.”

But there is no separation of church and state issue involved when religious citizens express political views and meet together to discuss them, according to the chief of staff of a Dallas-based civil liberties law firm.

“Religious Americans are allowed to be politically engaged. What’s next? Will the FFRF demand an investigation into Congress because it used to hold church services in the U.S. Capitol,” First Liberty Institute’s Mike Berry told The Epoch Times on Jan. 3.

“Of course, the FFRF was never one to let facts get in the way of its activist agenda. Sadly, it has raked in millions of dollars in donations by misleading people,” Berry added.

Cleta Mitchell, a Washington attorney who specializes in nonprofit legal issues, told The Epoch Times on Dec. 3 that “this is just another example of Christian-haters trying to stop believers from the free exercise of their religious beliefs. I have spoken with the attorney for the host mission and they have taken all steps to comply with IRS requirements for 501(c)(3) entities, such as this church.”

Mitchell, who said the IRS should “dismiss this frivolous complaint outright,” is encouraged that “religious leaders and institutions nationwide will band together to challenge the IRS regulations on First Amendment grounds. That constitutional reckoning is long overdue.”

Tim Murtaugh, director of communications for donaldtrump.com, agreed, telling The Epoch Times that “the campaign complies with the law, and, while we expect the church to do so as well, they don’t lose their First Amendment rights, either.”

Murtaugh said the Trump campaign is “curious to know if this group is also calling for the investigation of all Democrat candidates who have campaigned endlessly in churches across the country this election cycle and in years past. Or does their curiosity extend only to Republicans?”

The FFRF is a frequent challenger of religious activities, including most recently another Florida case involving Brevard County Sheriff Wayne Ivey. who had “In God We Trust” emblazoned on all of his department cars.

When FFRF demanded the declaration be removed from official Brevard County law enforcement vehicles, Ivey told The Epoch Times in a Nov. 7, 2019, interview that “they [FFRF] have a better chance of me waking up thin tomorrow morning than they do of me taking that motto off our cars.”

The FFRF also recently challenged the decision of Harris County, Texas, Sheriff Ed Gonzalez to allow hip-hop artist and Christian convert Kanye West to hold one of his “Sunday Service” worship events in the local jail.

When asked if Gonzalez would abide by FFRF’s demand that no such events be allowed in the future, a spokesman for the sheriff told The Epoch Times that “the Harris County Sheriff’s Office works with all organizations—secular and religious—that are willing to positively support inmates’ efforts to transition back into our communities better prepared to contribute to society.”