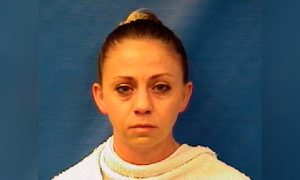 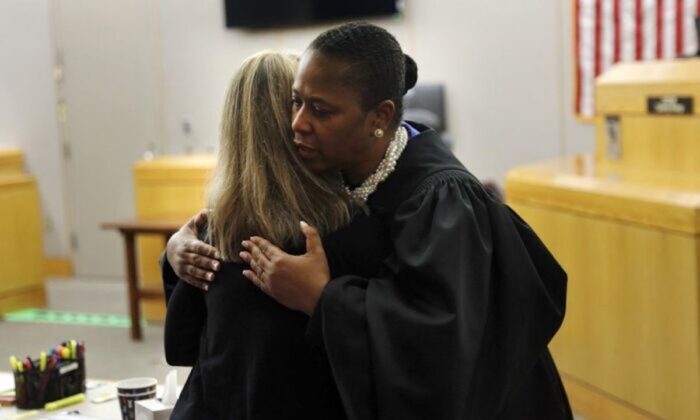 An atheist group has filed a complaint against the judge who hugged convicted police officer Amber Guyger in court, saying she violated the constitution by proselytizing and gifting her a bible.

Judge Tammy Kemp hugged Guyger in court after the jury had handed down a 10-year sentence for shooting and killing her neighbor Botham Jean in his own apartment, which Guyger said she had mistakenly entered thinking it was her own.

Jean’s 18-year-old brother had taken to the witness stand in the Dallas courtroom after the sentencing, saying he forgave Guyger. He then pleaded to be allowed to hug her, and was granted permission.

According to Fox News, Judge Kemp had later embraced members of the victim’s family.

Then, with court proceedings finished, she then walked to her chamber and returned with a Bible, which she gifted to Guyger, and the two prayed together, asking for salvation.

That action was an abuse of power according to the Freedom From Religion Foundation (FFRF), which filed a complaint (pdf) saying the Kemp’s “proselytizing actions overstepped judicial authority, were inappropriate and were unconstitutional.”

The atheist campaign group said that her actions violated the separation between state and church.

“She was in a government courtroom, dressed in a judicial robe, with all of the imprimatur of the state, including armed law enforcement officers, preaching to someone who was quite literally a captive audience,” reads the complaint.

“Delivering bibles and personally witnessing as a judge is an egregious abuse of power,” said the complaint, which noted that the judge “handled the difficult trial with grace and aplomb.”

The complaint argued that even if Guyger is an avowed devout Christian, the gesture would still have been inappropriate and unconstitutional because Judge Kemp was acting in her official governmental capacity.

The complaint cited a transcript of the moment that Judge Kemp hugged Guyger, saying, “It’s because I believe in Christ. I’m not so good. You haven’t done as much as you think you have, and you can be forgiven. You did something bad in one moment in time. What you do now matters.”

In its brief mission statement, The FFRI claims that “moral progress” has been brought about by the non-religious.

George Milner, a veteran Dallas criminal law attorney, told the Dallas Morning News that he was not aware of any rules that would have prohibited Kemp’s behavior following the sentencing.

According to the Associated Press, some legal experts said since the trial was over and the jury dismissed, it isn’t clear whether she broke rules.

“We want our judges to be human and to show their humanity,” said Renee Knake, a law professor at the University of Houston and an expert in judicial ethics. “That’s why our cases are decided by human beings and not machines.”

According to AP, Kemp took over the 204th District Court after running as a Democrat in 2014, saying in a campaign ad at the time, “As a woman of faith with strong Christian values, my husband and I fasted and prayed about my decision to run.”

The First Liberty Institute, which campaigns for religious rights said in a statement: “FFRF is protesting Judge Kemp rather than joining the rest of the nation celebrating the compassion and mercy Judge Kemp demonstrated. We should all be thankful the law allows Judge Kemp’s actions and we stand with her and will gladly lead the charge in defending her noble and legal actions.”

The trial of Guyger had drawn close attention not only because of the dramatic twist of mistaken identity but also because it was seen by some commentators as a litmus-test of police accountability and of race relations.

Talking to AP, former Dallas County District Attorney Craig Watkins, who became the first black elected district attorney in Texas history, said he would often pray with Kemp, who was a colleague at the time, for guidance on complex cases.

“You’re having people of color that have the opportunity to make judges now,” Watkins said. “Their life experience and their religious points of view are different than what we’ve seen in the past. That’s just the evolution of our judicial system.”