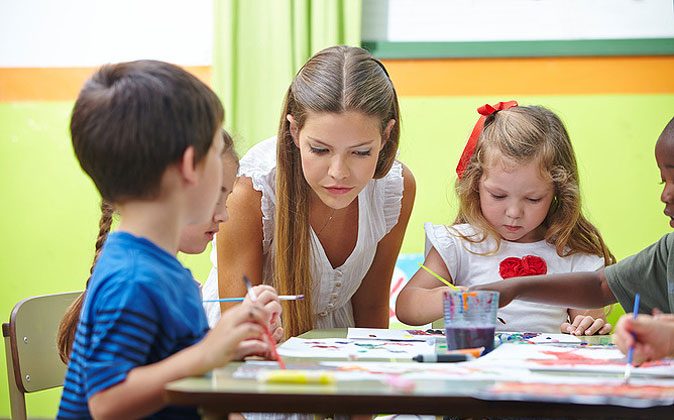 At What Age Are Children Ready for School?

When are children “ready” for school? There is much debate about when the transition between play-based pre-school and the start of “formal” schooling should begin. The trend in the UK primary school curriculum over recent decades has been towards an earlier start to formal instruction, and an erosion of learning through play.

But the evidence from international comparisons and psychological research of young children’s development all points to the advantages of a later start to formal instruction, particularly in relation to literacy.

Among the Earliest in Europe

Children in England are admitted into reception classes in primary schools at age four; in many cases, if their birthdays are in the summer months, when they have only just turned four. This is in stark contrast to the vast majority of other European countries, many of which currently enjoy higher levels of educational achievement. In Europe, the most common school starting age is six, and even seven in some cases such as Finland.

From the moment children in England enter the reception class, the pressure is on for them to learn to read, write and do formal written maths. In many schools, children are identified as “behind” with reading before they would even have started school in many other countries. Now the government is introducing tests for four-year-olds soon after starting school.

There is no research evidence to support claims from government that “earlier is better”. By contrast, a considerable body of evidence clearly indicates the crucial importance of play in young children’s development, the value of an extended period of playful learning before the start of formal schooling, and the damaging consequences of starting the formal learning of literacy and numeracy too young.

A range of anthropological studies of children’s play in hunter-gatherer societies and other evolutionary psychology studies of play in the young of mammals have identified play as an adaptation which evolved in early human social groups, enabling humans to become powerful learners and problem-solvers.

Some neuroscientists’ research has supported this view of play as a central mechanism in learning. One book by Sergio and Vivien Pellis reviewed many other studies to show that playful activity leads to synaptic growth, particularly in the frontal cortex – the part of the brain responsible for all the uniquely human, higher mental functions.

A range of experimental psychology studies, including my own work, have consistently demonstrated the superior learning and motivation arising from playful as opposed to instructional approaches to learning in children.

There are two crucial processes which underpin this relationship. First, playful activity has been shown to support children’s early development of representational skills, which is fundamental to language use. One 2006 study by US academics James Christie and Kathleen Roskos, reviewed evidence that a playful approach to language learning offers the most powerful support for the early development of phonological and literacy skills.

Second, through all kinds of physical, social and constructional play, such as building with blocks or making models with household junk, children develop their skills of intellectual and emotional “self-regulation”. This helps them develop awareness of their own mental processes – skills that have been clearly demonstrated to be the key predictors of educational achievement and a range of other positive life outcomes.

Within educational research, a number of longitudinal studies have provided evidence of long-term outcomes of play-based learning. A 2002 US study by Rebecca Marcon, for example, demonstrated that by the end of their sixth year in school, children whose pre-school model had been academically-directed achieved significantly lower marks in comparison to children who had attended child-initiated, play-based pre-school programmes.

A number of other studies have specifically addressed the issue of the length of pre-school play-based experience and the age at which children begin to be formally taught the skills of literacy and numeracy. In a 2004 longitudinal study of 3,000 children funded by the department of education itself, Oxford’s Kathy Sylva and colleagues showed that an extended period of high-quality, play-based pre-school education made a significant difference to academic learning and well-being through the primary school years. They found a particular advantage for children from disadvantaged backgrounds.

Studies in New Zealand comparing children who began formal literacy instruction at age five or age seven have shown that by the age of 11 there was no difference in reading ability level between the two groups. But the children who started at five developed less positive attitudes to reading, and showed poorer text comprehension than those children who had started later.

This evidence, directly addressing the consequences of the introduction of early formal schooling, combined with the evidence on the positive impact of extended playful experiences, raises important questions about the current direction of travel of early childhood education policy in England.

There is an equally substantial body of evidence concerning the worrying increase in stress and mental health problems among children in England and other countries where early childhood education is being increasingly formalised. It suggests there are strong links between these problems and a loss of playful experiences and increased achievement pressures. In the interests of children’s educational achievements and their emotional well-being, the UK government should take this evidence seriously.

David Whitebread consults to and has received a research grant from the Lego Foundation. He is a spokesperon for the ‘Too Much, Too Soon’ campaign. This article was originally published on The Conversation. Read the original article.