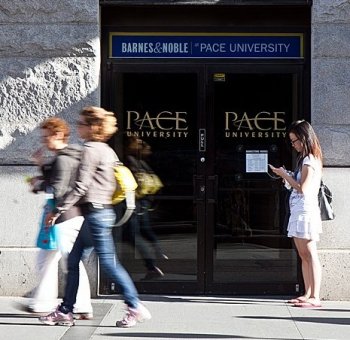 People walk past the Pace University in Manhattan. The associate-director at the Confucius Institute at Pace University said the Chinese regime has a 'right to ban' Falun Gong practitioners from volunteering at the Institute. (AMAL CHEN/THE EPOCH TIMES)
US

Matthew Robertson
Matthew Robertson is the former China news editor for The Epoch Times. He was previously a reporter for the newspaper in Washington, D.C. In 2013 he was awarded the Society of Professional Journalists’ Sigma Delta Chi award for coverage of the Chinese regime's forced organ harvesting of prisoners of conscience.
View profile
Follow
biggersmaller
Print
Bright young graduates in China are being recruited to come teach in the United States as volunteers. Ideally they should have excellent Chinese language skills, a friendly manner, be able to sing, play an instrument, and have good grades. Oh, and they’re not allowed to believe in Falun Gong.

The discriminatory hiring policy applies to all Chinese who would volunteer at Confucius Institutes (CI) in the United States. CIs are nonprofit language and cultural schools funded and supervised by China’s communist regime; they are set up in American universities in partnership with universities in China.

The discriminatory hiring policy is posted in English on the website that oversees the CIs, the “Chinese Language Council International,” commonly known as the Hanban.

In the third “basic qualification” it says volunteers must be “Aged between 22 to 60, physical and mental healthy, no record of participation in Falun Gong and other illegal organizations, and no criminal record.” http://www.chinese.cn/hanban_en/node_9806.htm

The Hanban is currently led by Liu Yandong, a member of the Chinese Communist Party’s powerful Politburo. Her previous assignment was to head up the United Front Work Department, a communist alliance- and front-building agency that dates back to the Chinese civil war.

In interviews with half a dozen officers at CIs in universities around the United States, directors and senior staff members had mostly not heard of the policy. But when it was explained to them, they did not seem particularly fazed by it.

She did not know of the discriminatory hiring policy, and said she would “rather not address this issue.” Being in the United States, Chu certainly would not discriminate against, or even ask about, a job candidate’s beliefs, she said.

But as for the discrimination in China, she said: “It’s not our policy to judge or even to comment on the reason … I don’t think you can use American standards to make any judgment.

“Are you able to use your standard to judge any other foreign country’s policy? I don’t think it’s fair.”

The associate-director at the Confucius Institute at Pace University in New York held a similar view on the matter. “They send them to us,” said Yan Yuzhou, who is an employee of Pace University. “You know, volunteers from China, the Chinese government has a right to ban them, I think.”

Ms. Yan said that it was better to “increase an understanding of the culture” rather than focus on what she regards as political issues.

“If people believe in Falun Gong, it’s their choice,” said Rachel Zeng of the Nebraska-Lincoln University Confucius Institute. “If the Chinese government is against it, it’s their policy.”

But when that policy violates fundamental U.S. principles, and applies to people working at institutions in the United States, the problem is more complex than that, according to experts interviewed for this article.

None of the nine Confucius Institutes around the United States contacted by The Epoch Times expressed their disapproval or disagreement with the policy. There are 68 of them in the United States in total, according to one official website. http://confuciusinstitute.unl.edu/institutes.shtml#United_States

“What this comes down to is whether or not the Confucius Institute is an act of the sovereign,” said Marci Hamilton, Paul R. Verkuil Chair in Public Law at Yeshiva University in New York City.

Since CIs are not, unlike Chinese Embassies, acts of a sovereign subject to Chinese laws, as private entities they are subject to anti-discrimination laws in the United States, Hamilton said.

“It’s so blatant,” she continued. “It’s unethical and illegal in the free world. The notion that in the United States or Canada we tolerate conduct simply because it originates in another country is false.”

Two ways that Hamilton suggested the law could be enforced in this case are an investigation by the United States Justice Department or a private lawsuit from an individual who was discriminated against.

The latter is unlikely since Falun Gong has been persecuted in China since 1999. The spiritual practice involves practicing five meditative exercises and living according to the principles of truthfulness, compassion, and tolerance. As the practice exploded in popularity in the 1990s, the then-head of the CCP, Jiang Zemin, came to fear it as a competitor with the Communist Party for the hearts of the Chinese people.

According to the Falun Dafa Information Center, hundreds of thousands of Falun Gong practitioners have been sent to labor camps and jails. There, they are subject to often brutal measures to force them to recant their faith. The Information Center can confirm over 3,400 deaths, but believes the true death toll is in the tens of thousands. The discriminatory hiring policy can be understood as an extension of this campaign.

A spokesperson with the Department of Justice, Xochitl Hinojosa, declined to comment on whether the department had heard of the case or was investigating it.

The legal question is complicated by the fact that it all takes place in China, according to Bryan Edelman, a trial consultant who has also written academic papers analyzing the legality of the Chinese state’s campaign against Falun Gong.

“I am not sure how the U.S. Courts would have jurisdiction over the hiring practices of a Chinese institution on Chinese soil hiring non-U.S. citizens,” he wrote in an email.

Outside of the academy, in the offices of advocates for religious freedom, and on the airwaves used by popular commentators, the policy is seen as religious discrimination, plain and simple.

“It’s just appalling. They’re using them [CIs] for soft power, to spread propaganda, and to stop the truth about the CCP from getting out,” said Faith McDonnell, Director of Religious Liberty Programs at the Institute on Religion and Democracy.

Ezra Levant, a conservative commentator who hosts the Prime Time program on the Sun News website in Canada, kicked it up a notch with a provocative comparison.