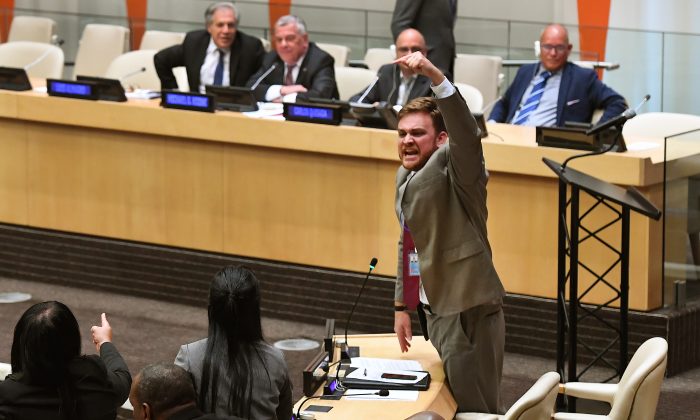 It was supposed to be a quiet event at the United Nations to discuss the plight of political prisoners in Cuba. Instead, it turned into an exercise of political protest.

Just 15 seconds into Ambassador Kelley Currie’s opening remarks at the U.N. on Oct. 15, protesters from the Cuban delegation who were seated around the room began to pound on the desks. Then, came the shouting.

Currie, the U.S. representative to the Economic and Social Council of the United Nations, asked Ambassador Michael Kozak and security to remove or quiet the protestors three times during her nine-minute remarks. The protesters were never silenced or removed.

“I want to thank the Cuban delegation again for giving us such a graphic demonstration of how they deal with alternative viewpoints in their country,” said Kozak, senior official of the U.S. State Department’s Bureau of Democracy, Human Rights, and Labor. “If this is the way the government of Cuba behaves in the chambers of the United Nations with security present, can you imagine what it would be like to be an individual Cuban citizen trying to speak their mind?”

The vocal display by the Cuban delegation was meant to silence people speaking out against Cuba’s oppressive policies. Ironically, that’s exactly what the panel intended to highlight.

As of September, there were 139 documented cases of political prisoners in Cuba, including 15 women, according to Carlos Quesada, executive director of the Institute of Race and Equality, who took part in the event. Currie noted more than 5,000 Cubans were detained for political reasons in 2017.

“Cuba’s political prisoners are a clear and unambiguous sign of the repressive nature of the regime,” Currie said. “Their imprisonment represents a blatant affront to the fundamental freedoms enshrined in the universal declaration of human rights.”

Quesada, who is a lawyer, said domestic laws and ill-defined criminal laws have allowed widespread corruption among the police. Evidence is made up to ensure convictions, creating a system where Cubans are locked up simply for speaking their minds.

Once in prison, Quesada said, conditions are very difficult. He said there are reports of prison officials offering bribes to other convicts to physically assault political prisoners, or start rumors about them, which makes them vulnerable to violence by other inmates.

“All of these acts violate Cuba’s international obligations to provide safe and respectful conditions to people deprived of their liberty,” Quesada said.

While shouting over protesters, he called for Cuba to ratify the International Covenant on Civil and Political Rights. The treaty, adopted by the U.N. in 1966, says that countries that sign guarantee their citizens civil and political freedom.

Former Cuban leader Fidel Castro opposed the treaty, but his brother, Raul, signed it in 2008, just four days after taking over as president. The Cuban government never ratified it and, based on the number of political prisoners in Cuban jails, they continue to disobey the rules detailed in the treaty.

“The Cuban people have long suffered under a Communist regime that suppresses their legitimate aspirations for freedom and prosperity and fails to respect their essential human dignity,” the presidential memo said.

In an effort to force change, Trump reinstated trade and travel restrictions that had been relaxed under former President Barack Obama.