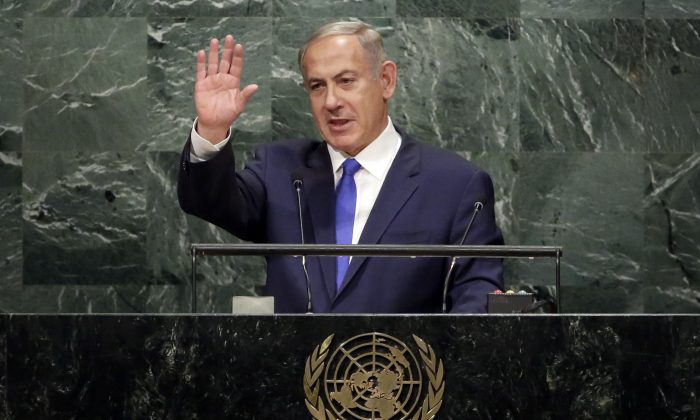 Netanyahu said that in return he would like to address the Palestinian Legislative Council.

“I am ready to negotiate all final status, but one thing I will never negotiate is the right to a one and only Jewish state,” Netanyahu said, arguing that recent changes in the Middle East would lead to improved relations with Israel’s neighbors.

The Palestinians have rebuffed Netanyahu’s past offers for meetings, saying there is no point given his hard line positions on all core issues. Netanyahu rejects a settlement freeze, rejects the ’67 borders as the basis for talks and rejects any division of Jerusalem. He has also said he would not uproot settlements.

Speaking shortly before Netanyanhu, Abbas called on the 193-member world body to exert greater effort than at any time in the past to establish a truly independent Palestinian state, as the 50th anniversary of Israel’s “abhorrent” occupation approaches in June 2017.

He also called on the U.N. to declare 2017 “the international year to end the Israeli occupation of our land and our people.”

Abbas said “our hand remains outstretched for making peace” but he questioned whether any Israeli leader is ready to make “a true peace … that will abandon the mentality of hegemony, expansionism and colonization.”

Abbas also accused Israel of “continuing to evade” an international conference that France wants to hold before the end of the year to focus on a framework and timeline for ending the occupation.

Earlier at the General Assembly meeting, India branded Pakistan a “terrorist state” in a stinging response to Pakistan’s criticism of Indian suppression of protests in disputed Kashmir.