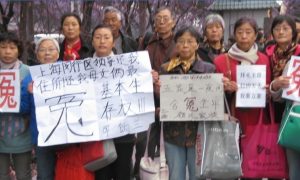 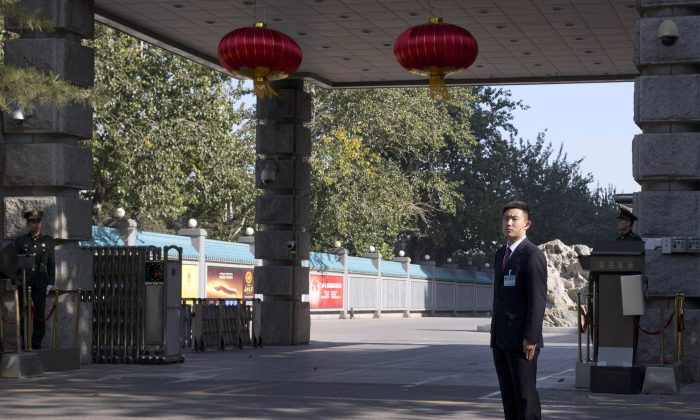 Security personnel on Nov. 7, 2013 guard the entrance to the military-controlled Jingxi Hotel, where the Third Plenum of the Central Committee, a major Communist Party meeting, is being held in Beijing. The meeting goes from Nov. 9-12 and will be used to announce new economic policies. (AP Photo/Ng Han Guan)
China

At Plenum in China, Primacy of Party Bedevils Reform Efforts

One of the Chinese Communist Party’s most important political meetings — the Third Plenum of the Central Committee— began over the weekend in Beijing. It has been greeted enthusiastically in the state-run press as a crucial turning point in the workings of China’s economic model, which currently features an unhealthy reliance on the government to push forward growth.

The Party’s mouthpiece media say that Party Chief Xi Jinping, with resilience, determination, and strict adherence to the basic principle of uncontested Communist Party rule, is forging ahead with a raft of changes that will put China on the path for future prosperity.

“A new era in pursuing progress from stability,” says one headline. “Stability” is typically a codeword for Party supremacy.

But it is precisely the insistence on the primacy of the Party’s place in China — above the law, and beyond accountability — that presents the most serious obstacle to the genuine turnaround that is hoped for, experts say.

“The current agenda of the session doesn’t touch on the core issue of China’s economic problems,” said Cheng Xiaonong, an economist who used to work for the top leadership in China, and who now lives in the United States. “So it’s not going to solve the problem.”

The greatest and most obvious problem China presently has is that people don’t buy enough goods and services: consumption was only 36 percent of China’s gross domestic product from 2009-2012, according to the World Bank. The US, by comparison, is in the 70s.

The single greatest source of economic growth in China has been investment — to the tune of 46 percent in 2012, according to the CIA Factbook — much of it paid for by bank loans.

Banks are told to lend to state-owned companies and government financing platforms, which bankroll the construction of cities, malls, airports, skyscrapers, highways, and railways, some of which go underutilized and never return their investment.

Despite oligopoly control of profitable industries, state-owned companies have not paid a cent back to the public, he said. Instead, they have received subsidies of over 100 billion yuan ($16 billion) since the mid-1990s. All this sucks limited resources away from where they should be deployed.

The problem alongside this one is the concentration of capital, where those with ties to the state can cash in on their connections to accumulate vast amounts of wealth, while many others have trouble finding decent middle class employment. The result is an extreme level of wealth inequality. There are 83 billionaires that serve as officials in one of the Communist Party’s legislature-style advisory bodies, for example.

Turning this around will require putting money into the pockets of the vast numbers of ordinary people. But because growth is slowing in China, it is impossible for everyone to keep getting richer, so the Party must engineer ways to transfer huge amounts of wealth to the masses of Chinese, and away from those who have it — in other words, away from the Party elite.

Michael Pettis, a well-known economist who focuses on China, writes in a blog post that “The only relatively quick way to rebalance the Chinese economy… is to transfer assets from the state sector to the household sector. This will not be easy.”

Cheng Xiaonong, and many others, are skeptical that this can even be achieved. “The polarization of wealth distribution is protected by the current political system,” he said in a telephone interview.

Much of the discussion about the dilemmas faced by the Communist Party in attempting to augur the new era of organic economic growth has revolved around whether Xi Jinping is able to accumulate the political power necessary to push a reform package through the notoriously inefficient and corrupt bureaucracies, and whether he will be able to defeat the “vested interests” that gain so much by the way that China’s economy currently works.

While this is true to a degree, says Cheng Xiaonong, the part of the equation that is not typically given due attention, he says, is that Xi Jinping is himself part of the system of power that naturally seeks to preserve the status quo, and all the privileges it entails for the Communist Party.