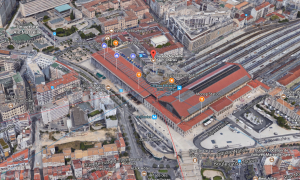 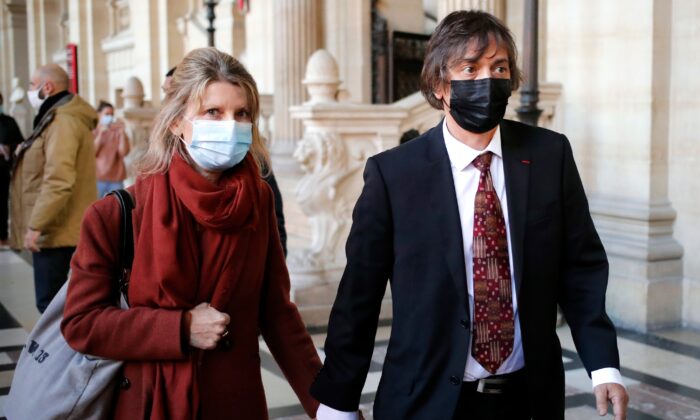 French-American Mark Moogalian, right, and his wife Isabelle arrive at the Thalys attack trial, at the Paris courthouse, on Nov. 19, 2020. The lawyer for an American who was scheduled to testify about his role in the dramatic capture of an ISIS terrorist operative aboard a high-speed train says his witness has been hospitalized after he flew in to Paris. (Francois Mori/AP Photo)
Europe

PARIS—One of the passengers who wrestled and disarmed an ISIS terrorist gunman aboard a high-speed train, foiling what could have become a mass slaughter, recounted Nov. 19 how he had been motivated by a fierce desire to shield his wife from harm.

“I was trying to protect Isabelle,” Mark Moogalian said before giving testimony at the attack suspect’s trial in Paris. “There was no way I was going to let anything happen to her. I was going to do my best.”

The heroics of Moogalian and other passengers who thwarted the gunman aboard the Amsterdam to Paris train on Aug. 21, 2015, inspired Clint Eastwood to direct a Hollywood reenactment: “The 15:17 to Paris.”

The gunman, Ayoub El Khazzani, faces a maximum sentence of life in prison if he is convicted of attempted terrorist murder. The trial of the 31-year-old Moroccan and three suspected accomplices opened earlier this week.

Moogalian said the hearings are allowing him to piece together the blur of events that day.

“Everything happened so fast. There was so much confusion,” he said.

His wife, Isabelle, said subduing El Khazzani was “a five-man job” and that she regarded her French-American husband as a hero. Moogalian helped disarm El Khazzani, wrestling away the Kalashnikov rifle the gunman was carrying before being shot himself with a pistol.

“They did it together, otherwise everybody would be dead,” she said.

Moogalian said: “We were all very lucky. It took five or six of us to prevent a real catastrophe.”

“All I know is that he shot me and he was carrying plenty of ammunition, enough to kill plenty of people.”

El Khazzani boarded the train in Brussels armed with the Kalashnikov, nine clips with 30 rounds each, an automatic pistol and a cutter, according to investigators. Once aboard the train, El Khazzani lingered in a restroom between cars and then emerged bare-chested with his weapons.

Another American who had been scheduled to appear as a star witness at the trial was hospitalized Thursday, casting doubt on whether he would still be able to testify about his role in El Khazzani’s dramatic capture.

Spencer Stone’s lawyer, Thibault de Montbrial, wouldn’t give details about what is ailing the former U.S. airman, citing medical privacy. He said Stone would not testify as planned on Thursday afternoon.

“The only thing I’m certain of is that he is not in a state to testify today. We are going to regroup this evening to gauge whether he can be heard tomorrow morning or afternoon.”

Stone has said he was coming out of a deep sleep when the gunman appeared. He and Alek Skarlatos, then a 22-year-old member of the U.S. National Guard recently back from Afghanistan, snapped into action, tackling the gunman.

Skarlatos was scheduled to testify Friday.