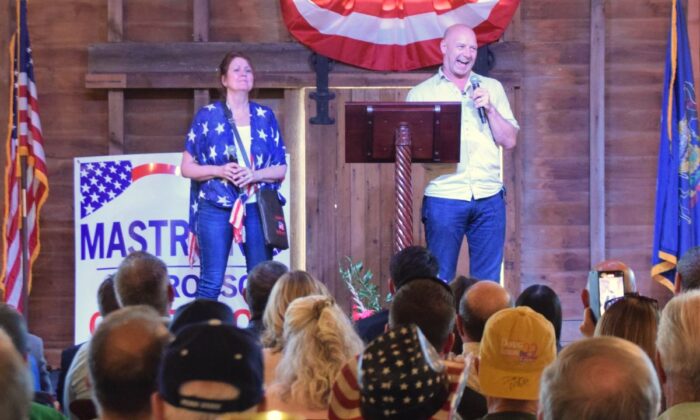 Individual voters have different priorities, even if they are in the same party. For many Republicans, those priorities share the core value of freedom.

As roughly 300 Republicans gathered Wednesday at the Star Barn in Elizabethtown, Pennsylvania, to hear gubernatorial candidate Doug Mastriano speak, The Epoch Times asked voters what issue they wish candidates and elected officials would focus on.

“The truth,” said Keenan Price of Lancaster County, who wants the freedom to authentically understand a candidate’s intentions. “Instead of bashing, tell me what you are going to do.”

Similarly, Kore Fisher of Lancaster County wants to hear what candidates intend to do for people instead of beating up on each other. Fisher says politicians should work on inflation and border security. He has heard Democrats say, “no one is above the law,” and while a person may get fined or arrested for speeding, those who cross the U.S. border illegally face no consequences.

“I can’t make sense of that,” Fisher told The Epoch Times.

Gordon Tomb of Lebanon County wants the freedom to use fossil fuels. He wants officials to promote a sensible energy policy that takes advantage of fossil fuels and nuclear power. He would also like to see responsible management of government funds, smaller government, and more careful spending.

Many voters are looking for candidates who speak to the individual voters’ interests.

Tom Zeager is president of Justice and Mercy Inc., a nonprofit organization dedicated to decreasing the effects of crime, increasing public safety, and restoring the lives of crime victims and offenders, according to its website.

Zeager wants leaders to focus on getting better results from the prison system. Recidivism is too high, he says. Instead of having prisons with revolving doors, inmates should be taught life skills and receive the emotional support they need to live a better life and never return to prison.

“Prisoners should not have the luxury of saying, ‘I don’t want to get better.’ They don’t know how good life can be. It is our job to provide programs that show them,” Zeager told The Epoch Times. He supports education for prisoners and school children, and says parents should have the freedom to decide which school their children attend.

For Chris Dorr, president of the American Firearms Association and a resident of Lancaster County, the top issue is the Second Amendment, the right of the people to keep and bear arms.

“As we watch the left dismantle our nation, the one freedom we have that will keep tyranny in check is the Second Amendment,” Dorr told The Epoch Times. “If we lose that, we lose our nation.”

When candidates speak to a room full of voters, they are trying to connect on a broad swath of issues. But beyond that, they must connect on values—that is, how the candidate will approach societal problems.

Mastriano often campaigns with his wife, Rebbie, at his side, and they used Wednesday’s rally to express their values on the issues.

“Women have a right to be born,” she said, “and to have a say in their children’s education.” They have a right to access baby formula and affordable groceries and a right to live in safe communities that are not overrun by crime, she said, as well as the right to a secure border, the Second Amendment, and to compete in sports not dominated by men.

“And I’m guessing every person in this room can identify a woman,” Rebbie Mastriano said.

The crowd of supporters applauded each item on her list.

Other immediate goals include no more COVID-19 vaccination requirements for employment. Pennsylvania would no longer be a sanctuary state, he said, and illegal immigrants flown into Pennsylvania would be put on a bus and dropped off in front of President Joe Biden’s home in Delaware.

Mastriano said he would hire a state Department of Environmental Protection director who understands business and would withdraw Pennsylvania from the Regional Greenhouse Gas Initiative, a “cap and trade” program that will increase energy costs.

“The goal is to get government off your back.”