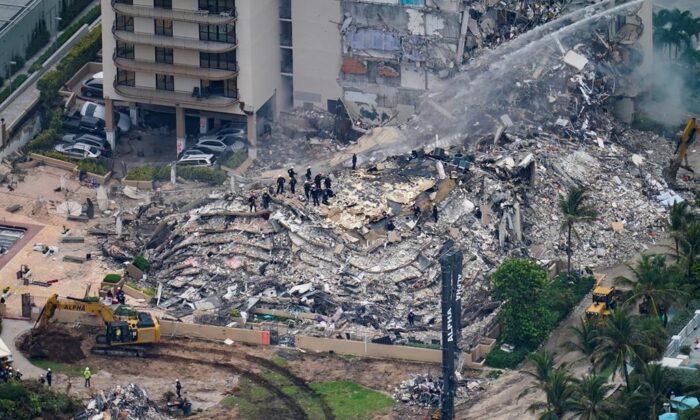 Rescue workers work in the rubble at the Champlain Towers South Condo is seen in Surfside, Fla., on June 25, 2021. (Gerald Herbert/AP Photo)
Canada

At Least Four Canadians ‘May Be Affected’ by Miami Building Collapse: Global Affairs

OTTAWA—Global Affairs Canada says it has received preliminary reports of at least four Canadian citizens who “may be affected” by the collapse of a seaside condominium tower in Miami.

The department says Canadian consular officials in Miami are in contact with local authorities to gather additional information and they are also in touch with the affected families.

It says no other information can be disclosed because of the Privacy Act.

Nearly 160 people are unaccounted for and at least four are dead after the 12-storey Champlain Towers South collapsed early Thursday morning in Surfside, just north of Miami.

Officials said they still don’t know exactly how many residents or visitors were in the building when it fell, but they were trying to locate 159 people who were considered unaccounted for and may or may not have been there.

While officials said no cause for the collapse has been determined, Florida Gov. Ron DeSantis said a “definitive answer” was needed in a timely manner.

Video showed the centre of the building appearing to tumble down first, and a section nearest to the ocean teetering and coming down seconds later.

About half the building’s roughly 130 units were affected, and rescuers used hydraulic cranes and ladders to evacuate at least 35 people from the still−intact areas in the first hours after the collapse. Television video early Friday showed crews fighting flare-ups of fires on the rubble piles.

The missing include people from around the world.

Israeli media said the country’s consul general in Miami, Maor Elbaz, believed that 20 citizens of that country are missing. Another 22 people were unaccounted for from Argentina, Venezuela, Uruguay and Paraguay, where an aide said first lady Silvana de Abdo Benítez flew to Miami because her sister, brother-in-law, their three children and a nanny were among the missing.

Gilmer Moreira, press director for the government palace, said the wife of Paraguayan President Mario Abdo Benítez “has already received official information about the search for her family” and was awaiting more details.