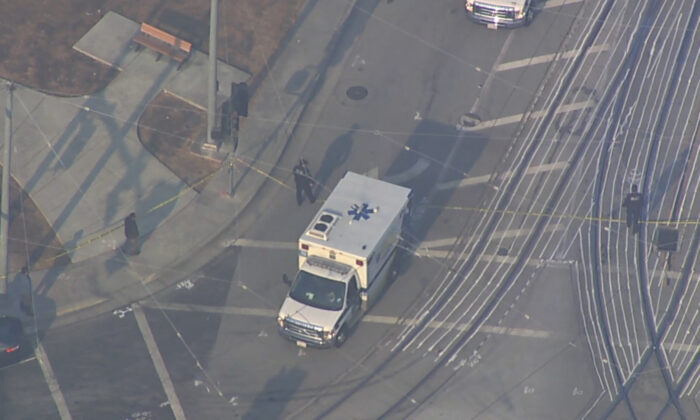 Police respond to a shooting in San Jose, Calif., on May 26, 2021. (Courtesy of KGO)
Crime and Incidents

The Santa Clara Sheriff’s Office in California said Wednesday that eight people died during a shooting at a Valley Transportation Authority railyard near San Jose.

“There are multiple injuries and multiple fatalities in this case,” sheriff’s Deputy Russell Davis told reporters near the crime scene, while confirming the number of victims who died. “The suspect is confirmed deceased.”

Davis said the suspect was an employee at the Valley Transportation Authority and the victims were also employees of the agency. The incident occurred at around 6:30 a.m. PT.

It’s not clear what type of firearm the suspect, who was not identified, used in the shooting, said Davis. Also unclear is whether the shooting took place indoors or outdoors.

“A horrible tragedy has happened today, and our thoughts and love goes out to the VTA family, the organization, and what they’ve had to go through,” Valley Transportation Authority chair Glenn Hendricks told reporters on the scene, adding that the incident occurred when the light rail service was starting for the day.

The shooting took place where Valley Transportation Authority vehicles are maintained and stored, he said.

“This is a horrific day for our city and it is a tragic day for the VTA family and our heart pains for the families and the co-workers because we know so many are feeling deeply this loss of their loved ones and their friends,” San Jose Mayor Sam Liccardo wrote on Twitter.

Agents from the Bureau of Alcohol, Tobacco, Firearms, and Explosives (ATF) and from the FBI said they were responding. California Gov. Gavin Newsom wrote on Twitter that he was monitoring the situation.

The president of the Amalgamated Transit Union International, a labor union, said he is “shocked and deeply saddened” by the shooting.

“Our hearts and prayers are with our sisters, brothers, and their families at Amalgamated Transit Union (ATU) Local 265,” President John A. Costa said in a statement. “We are working to provide support and assistance to the victims’ families, and everyone impacted by this tragic event.”

The shooting is sure to fuel more calls from within the state and nationwide to push for restrictions on firearms purchases. After several mass shootings earlier this year, President Joe Biden and Democrats in Congress issued a series of gun-control proposals, while the House of Representatives passed two gun background check laws.