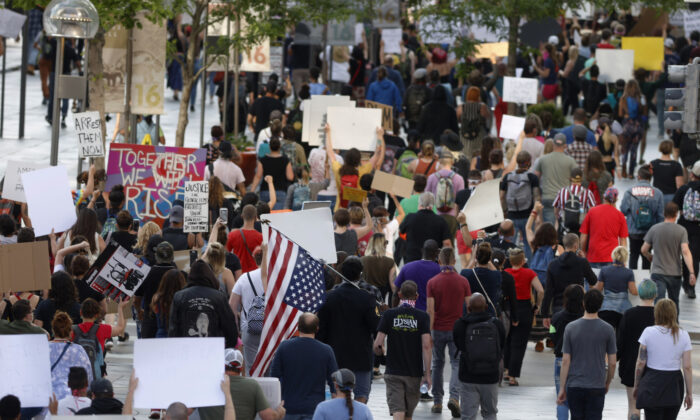 Protesters walk down the 16th Street mall in Denver, Colorado, during a protest over the death of George Floyd, a handcuffed black man who died in police custody in Minneapolis, on May 28, 2020. (AP Photo/David Zalubowski)
Crime and Incidents

DENVER—Protesters swarmed Denver on Thursday, with some turning violent following a peaceful demonstration against the death of a black man in Minneapolis police custody. Some protesters blocked traffic and smashed vehicles leading police to use tear gas to disperse them.

Hundreds of demonstrators stood in the downtown streets and chanted as darkness fell outside the Colorado State Capitol, where protesters spray-painted graffiti and broke car windows. In other areas of downtown Denver, police in riot gear fired gas canisters, used rubber bullets and walked in a phalanx through the streets to drive protesters away. The protest briefly spilled over onto Interstate 25, blocking all lanes of traffic until police used tear gas to disperse the crowd.

The protests continued into the night, despite Denver Mayor Michael Hancock pleading for calm.

“I certainly understand everyone’s frustration and sense of pain and disgust following the murder of George Floyd in Minneapolis,” he said in a video posted on Twitter. “But I want to plead to everyone. Let’s demonstrate, but let’s demonstrate peacefully. Leave the weapons home.”

Earlier in the protest, gunfire from an unidentified source outside the state Capitol sent people running for cover. Gary Cutler, a spokesman for the Colorado State Patrol, said the shots were fired in a park across the street. Most of the protesters already had left the area and were marching downtown.

Cutler said the Capitol building was locked down, and everyone inside was safe. No injuries have been reported from the shots.

State Rep. Leslie Herod, who was at the Capitol, tweeted, “We just got shot at.”

Police spokesman Kurt Barnes said it’s unclear who was being targeted. No one has been arrested.

About six or seven shots were fired, he said.

Several hundred protesters had gathered to call for justice following the death of Floyd, who died in police custody in Minneapolis on Monday after an officer knelt on his neck for almost eight minutes. In footage recorded by a bystander, Floyd pleaded that he couldn’t breathe.

Aerial footage showed several protesters smashing the windows out of at least two vehicles parked outside the Capitol, and others spray-painted graffiti on the Capitol steps.

A cellphone video shot by protester Anabel Escobar, 29, showed a man on the hood of an SUV making its way through the crowd in front of the Capitol. The video showed the driver speeding up and then apparently trying to run the man over after he fell off the hood. The vehicle sped away as other protesters chased it. It was unclear if the man on the hood was injured.

As the protest started, The Denver Police Department tweeted a message from Chief Paul Pazen sending condolences to Floyd’s family and saying the city’s officers do not use the tactics employed by the Minneapolis officers.

He called that type of force “inexcusable.”

Four Minneapolis police officers have been fired, and the mayor has called for the officer who knelt on Floyd’s neck to be criminally charged.

The death has led to violent protests in Minneapolis and demonstrations in other cities, including Los Angeles.