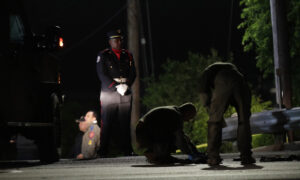 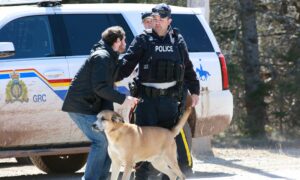 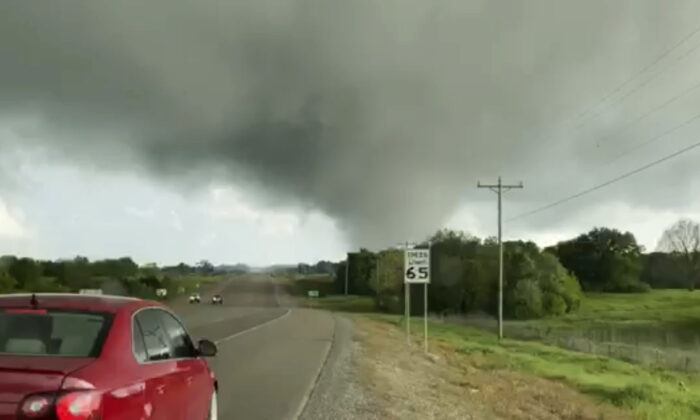 This image made from video provided by Thomas Marcum shows a tornado seen from State Highway 48 in Durant, Okla., on April 22, 2020. (Thomas Marcum via AP)
US News

At Least 6 Dead as Storms Hit Oklahoma, Texas and Louisiana

Severe weather was moving through Mississippi early on April 23 after apparent tornadoes tore through parts of Oklahoma, Texas and Louisiana, where six deaths included a trailer factory worker whose body was found a quarter mile from his workplace.

More than 100,000 customers from Texas to Mississippi were without power Thursday as the severe weather moved through, according to poweroutage.us, which tracks utility reports.

The worker was killed in southern Oklahoma’s Marshall County, where the storm hit Madill, near the Red River, about 4:30 p.m. Wednesday, causing widespread damage to the town, including its residential neighborhoods, said Donny Raley, the city’s emergency manager.

The worker’s body was found about a fourth of a mile from J&I Manufacturing, a trailer factory outside town where a suspected twister hit just as the workforce was leaving for the day, causing severe damage, Marshall County Emergency Management Director Robert Chaney said. Chaney said he had no other information on the person.

At least three people were killed when apparent tornado touched down in southeast Texas at about 6 p.m. Wednesday near Onalaska, about 75 miles north of Houston, the Polk County Emergency Management System said in a statement. The storm rumbled east through Seven Oaks and caused severe damage to homes and other structures, said Carrie Miller, a spokeswoman for Polk County Judge Sydney Murphy.

There was no immediate information on how the victims were killed.

A woman was killed on a bridge in Woodworth, Louisiana, 15 miles south of Alexandria, due to the severe weather, the Rapides Parish Sheriff’s Office told KALB-TV.

The sheriff’s office did not provide detail on how she died.

The Alexandria campus of Louisiana State University also saw some damage from the storm. The university tweeted, “All resident students safe. There is damage to DeWitt Livestock building and a camper flipped over.” The campus was also left without power.

The Clarion Ledger reported that storms were moving through Mississippi early Thursday, bringing the threat of tornadoes, flooding and wind surges.

The storms crossed into southwest Mississippi before midnight Wednesday and radar indicated tornado, the Ledger said. There were no immediate reports of damage or injuries in Mississippi early Thursday.

A National Weather Service team will be dispatched to survey damage and to confirm whether the storms were tornadoes.