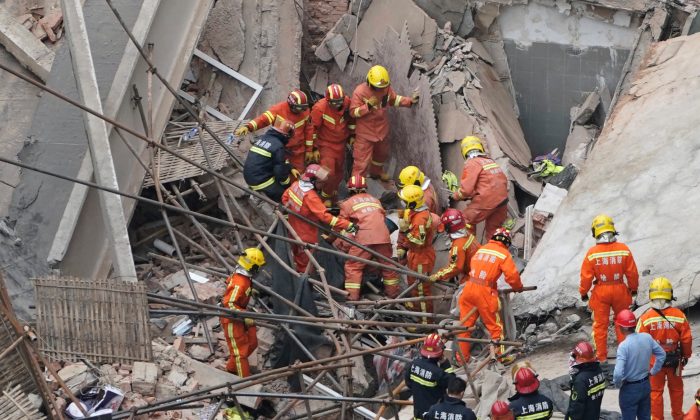 Firefighters work at the site where a building collapsed, in Shanghai, China on May 16, 2019. (Aly Song/Reuters)
Social Issues

SHANGHAI—A building that was being refurbished collapsed on May 16 in downtown Shanghai, and at least nine people are trapped while 11 have been pulled from the rubble. Reuters reported that five people were killed.

The building in Shanghai’s Changning district collapsed late in the morning at around 11:30 a.m., trapping some 20 people inside, the city government said in a statement.

It did not say why the building collapsed.

By early afternoon, 11 out of the approximately 20 people buried in the collapse had been pulled from the rubble. Their conditions were not immediately known.

Public anger over safety standards has grown in China over industrial accidents. Recent months have been particularly deadly for Chinese workers, underscoring shoddy enforcement of safety regulations and a desire by management to cut corners as the economy slows.

In March, 78 people were killed in a blast at a chemical plant in the eastern city of Yancheng that had numerous safety violations, making it one of China’s worst industrial accidents in recent years.

Earlier, in November, at least 22 people were killed in an explosion outside a chemical plant in the northeastern city of Zhangjiakou, which will host competitions in the 2022 Winter Olympics.

A major fire in Shanghai in 2010 destroyed a 28-story apartment building that was under repair, killing at least 58 people.