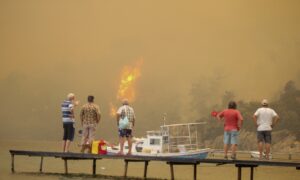 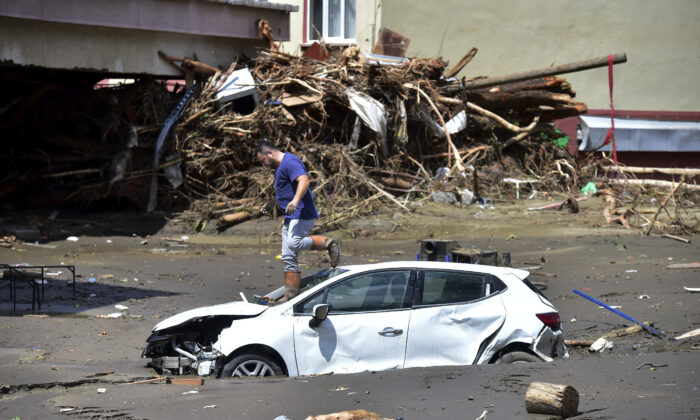 A man checks his car buried in the mud after floods and mudslides killed about three dozens of people, in Bozkurt town of Kastamonu province, Turkey, on Aug. 13, 2021. (AP Photo)
Europe

Turkey: Flood Deaths Rise to at Least 44 as Rescuers Push On

ISTANBUL—The death toll from severe floods and mudslides in coastal Turkey has climbed to at least 44, the country’s emergency and disaster agency said Saturday.

Torrential rains that pounded the Black Sea provinces of Bartin, Kastamonu, and Sinop on Wednesday caused flooding that demolished homes, severed at least five bridges, swept away cars, and rendered numerous roads unpassable. Turkish disaster agency AFAD said 36 people were killed in Kastamonu, seven in Sinop, and one in Bartin.

Nine people remained hospitalized in Sinop and one person was missing in Bartin province, according to the agency. But some residents said on social media that there are hundreds more missing, a statement also made by an opposition lawmaker.

About 2,250 people were evacuated across the region, some lifted from rooftops by helicopters, and many were being temporarily housed in student dormitories, authorities said.

Experts in Turkey say interference with rivers and improper construction were contributors to the massive damage in the floods.

Geologists have said that construction narrowed the river bed and the surrounding alluvial flood plain of the Ezine stream in Kastamonu’s Bozkurt district, where the damage was most severe, from 400 meters (1,312 feet) to 15 meters (49 feet). Residential buildings were built along the waterfront.

During severe rains, the contracted stream has limited area in which to move and can overflow. Videos posted by residents showed water rushing downstream in Bozkurt as the surrounding buildings and roads flooded.

The floods struck on the heels of wildfires in southern Turkey that devastated forestlands in the seaside provinces of Mugla and Antalya, which are popular with tourists. At least eight people died and thousands of residents were forced to flee.