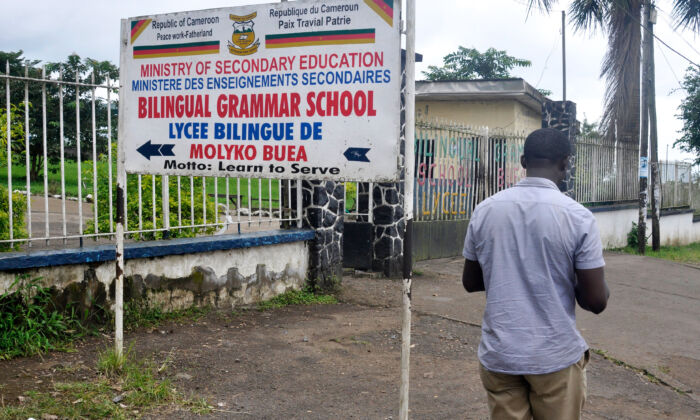 A man walks past the entrance of the bilingual Lycee of Buea, capital of south west Cameroon, one of the two regions of the country in the grip of a violent crisis on September 24, 2019. (Reinnier Kaze/AFP via Getty Images)
World

At Least 32 Villagers Massacred in Ethnic Attack in Cameroon

Simmering tensions between two struggling communities in a remote area of southwestern Cameroon over the ownership of a fertile piece of land degenerated into a bloodbath on June 25, leaving at least 32 people dead.

In recent years, Bakinjaw and Mavas—two communities in the Akwaya district in Cameroon—have both claimed ownership of the disputed Ufambe fertile farmland. But the latest squabbles suddenly turned violent because of a war of secession raging in the area.

About 100 heavily armed secessionist fighters broke into the home of an elected representative, where several people were gathered for a family funeral, and immediately started firing at the crowd, army spokesman Cyrille Serge Atonfack said in a June 28 statement.

“In the process, they set his home ablaze—alongside the coffin containing the remains of the people’s representative’s brother, before retreating under pressure from the defense and security forces who had just arrived [at] the scene to intervene,” Atonfack wrote.

Violence has wracked the Anglophone Northwest and Southwest regions of Cameroon since lawyers and teachers went on strike in 2016 in peaceful protest against a government they charge is attempting to wipe out the cultural values of the community.

The Cameroon military has accused Anglophone separatists of masterminding the massacre.

Ferdinand Adawa Ugbe never lived to see the cocoa plantation he planned to set up on the Ufambe farmland, in his native village of Bakinjaw.

The 40-year-old businessman was among those shot and killed when a group of marauding gunmen, allegedly hired by the rival Oliti community, stormed his village.

“He promised to come and see me in August so we can finalize our plans of setting up a cocoa farm on that fertile land,” a sibling of Ugbe who spoke on condition of anonymity for fear of retaliation, told The Epoch Times.

“I was filled with a lot of anger and revenge when I learned of his death,” he said. “I cried like a baby, seeing my brother lying on the floor lifeless. Someone who was full of life and joy. The attackers were burning everywhere, shooting at random.”

At least 32 villagers, among them five Nigerians, were either shot at close range, slaughtered, or burned alive, while several others were wounded.

“Devastated and enraged, the villagers came out en masse and in a spontaneous revolt, to fiercely retaliate in their own way the attack of the terrorist horde, which finally retreated into the surrounding forests,” Atonfack said.

Four of the attackers were killed, with “several others injured and on the run,” he said.

He added that government troops have been kept on “high alert” in the region, in order to prevent new attacks while operations are underway to find the assailants.

A local chief in the area, who spoke on condition of anonymity for security reasons, confirmed that prior to the assault in Bakinjaw, rumors of the neighboring Olitis’ plan “to use armed separatists to attack the village” had gone viral.

“On April 29, the Olitis of Mavas attacked Bakinjaw farmers on that same piece of land and killed three, wounding two others,” the official told The Epoch Times.

He said many villagers are still missing following the June 25 confrontations.

“The dead were buried in mass graves. Some of the corpses were dumped in the pit toilets,” he told The Epoch Times.

“The entire village has been deserted. There are rumors that the invaders promised to come back and finish the job they just started.”

The leaders of the Anglophone secessionist movements didn’t respond by press time to a request by The Epoch Times request for comment.

The claimed hiring of Anglophone separatist fighters for revenge attacks by rival villages is new, and signals a grim twist in a conflict that has seen more than 6,000 people killed, close to 1 million displaced, and hundreds of thousands of children deprived of education.

The killings come amid the release of a report by Human Rights Watch that accuses the rebels of serious rights abuses.

In a June 27 report, the rights group claimed the rebels—who claim to be fighting for the liberation of Anglophone Cameroonians—kidnapped, terrorized, and killed civilians across the English-speaking regions with “no apparent fear of being held to account by either their own leaders or Cameroonian law enforcement.”

“Abuses are continuing, and this is part of the wider pattern of abuses by separatist fighters across the Anglophone regions,” Ilaria Allegrozzi, senior central Africa researcher at Human Rights Watch, told The Epoch Times in a text message.

“Unlawful killings, torture, kidnappings, and attacks against education—these are the types of abuses we documented in our latest report,” she wrote.

“We are particularly concerned by attacks against education, students, teachers, and schools are being targeted, and these attacks are depriving an entire generation of children of their fundamental right to education.”

Government forces also have been carrying out “abusive counter-insurgency operations” across the regions since 2017.

“They [Cameroon government soldiers] have committed a series of very serious abuses: burning of villages, destruction of property, killing of civilians, torture, and arbitrary arrests and detention, and even sexual violence,” Allegrozzi wrote.

In such a “climate of impunity,” she insists justice is needed to ensure accountability for these abuses.

“Pursuing the military solution won’t fix the problem. The crisis is likely to continue unless the path of justice is undertaken by the authorities and also by the separatist fighters who need to stop committing abuses against civilians.”