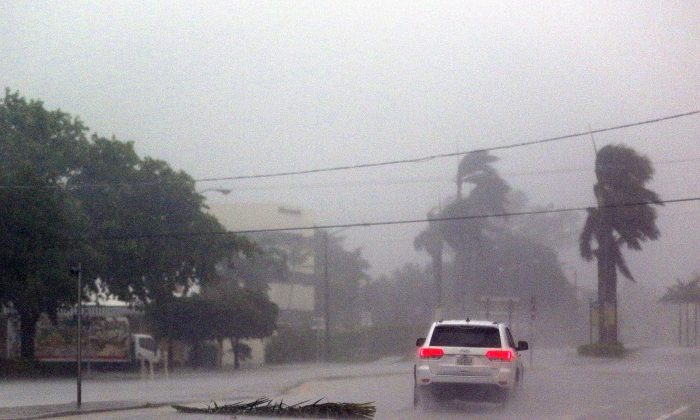 A lone car drives down a road as Hurricane Irma strikes on September 10, 2017 in Boca Raton, Florida. (Marc Serota/Getty Images)
US

Hurricane Irma hit the Florida Keys Sunday morning as powerful winds and rain battered the state in what is believed to be one of the worst storms to hit the area in living memory.

The storm has left at least three people dead as of writing, and also left over 1 million houses and businesses without power in Florida, ABC News reported.

When the center of Irma blew along the northern coast of Cuba Saturday morning, Irma briefly became a Category 3 hurricane. But early Sunday morning, it moved back up to a Category 4, according to Accuweather.

As of 10 a.m. today, the storm’s eye was moving away from the Florida Keys to the north of Florida’s west coast where the city of Naples braced for impact, ABC News reported.

“Unfortunately, there is no way the United States is going to avoid another catastrophic weather event,” Dr. Joel N. Myers, founder, president and chairman of AccuWeather said.

“There will be massive damage in Florida. [It will be] the worst single hurricane to hit Florida since Hurricane Andrew in 1992,” he said.

At the Naples Airport, wind reached 75 mph early Sunday as officials urged people to stay indoors and away from windows.

The Key West National Weather Service also warned Florida residents not to be tricked if winds start to suddenly calm down.

“IF winds go calm, you’re in the eye. Stay inside! Winds dramatically shift and will do so violently! STAY INSIDE!” the weather service tweeted on Sept. 10.

Currently, Irma is threatening all of the Florida Keys and South Florida and will soon spread those devastating effects farther north across the Florida Peninsula.

Cities most at risk of suffering from severe damage include Tampa, Fort Myers, Naples, Sarasota, and Miami, according to Accuweather.

Miami’s National Weather Service tweeted 11 a.m today that the eye was heading towards the southwest Florida coast and that everyone should remain sheltered.

“11:04 AM: Eye of #Irma heading towards the SW #Florida coast. Everyone needs to remain sheltered in place” the service tweeted.

Miami Police are now sheltering in place and are no longer responding to calls as Hurricane Irma bears down on South Florida and the Florida Keys Sunday.