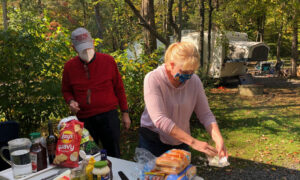 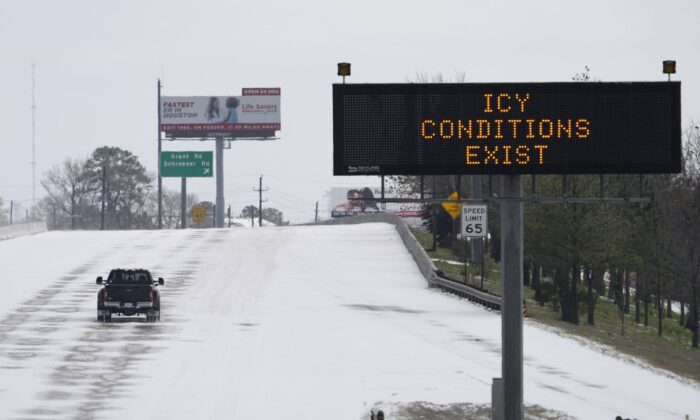 A truck drives past a highway sign in Houston, Texas, on Feb. 15, 2021. (David J. Phillip/AP Photo)
Crime and Incidents

At least three people were killed when a tornado tore through a seaside town in North Carolina as millions of people in Texas remained in the dark early Tuesday amid subfreezing temperatures.

The tornado also left at least 10 people injured after it hit just after midnight Tuesday in southeastern Brunswick County near Grissettown in the Ocean Ridge Plantation Community, authorities said. The tornado destroyed homes, downed powerlines that left thousands without electricity, and snapped trees in half, news outlets reported.

“It’s something like I have never seen before. A lot of destruction. It’s going to be a long recovery process,” Brunswick County Sheriff John Ingram said at a press conference early Tuesday.

Ingram said searches for missing people were underway and will increase during the day. He asked people to avoid the area while crews work to clear the streets and search for victims.

Meanwhile, nearly 4 million homes and businesses were without power early Tuesday in Texas, where temperatures dipped into the single digits overnight.

More than 250,000 people also lost power across parts of Appalachia, and another quarter-million were still without electricity after an ice storm in northwest Oregon, according to poweroutage.us, which tracks utility outage reports.

In Houston, a woman and a girl died from suspected carbon monoxide poisoning at a home without electricity from a car running in an attached garage, police said.