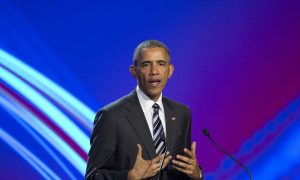 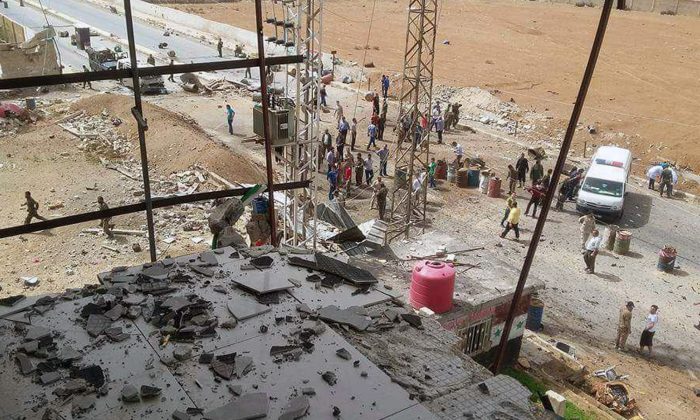 This image released by the Syrian official news agency SANA, shows Syrian citizens gathering at the scene where a suicide bomber detonated his explosives-packed vehicle at a military checkpoint at the entrance to the Sayyida Zeinab suburb, Damascus, Monday, April 25, 2016. A bomb blast in a Damascus suburb that is home to one of the holiest Shiite shrines in Syria killed eight people on Monday, according to a pro-government TV station and an activist-run monitoring group. (SANA via AP)
Middle East

DAMASCUS, Syria— Violence in Syria continued for the fourth straight day to chip away at what remains from a cease-fire that has effectively collapsed, leaving at least 28 people dead Monday in reciprocal shellings between government forces and opposition in the country’s largest city while a bomb blast disrupted a relative quiet in a Damascus suburb that is home to one of the holiest Shiite shrines here.

At least 20 people were killed in the shelling on Aleppo, pro-government media and activist-run monitoring groups said; while eight died when a suicide bomber detonated his explosive-packed vehicle at a military checkpoint in the Damascus suburb of Sayyida Zeinab.

In the past week, nearly 150 people have been killed in northern Syria and near Damascus, marking a major escalation that has seen a fragile truce take a downward spiral to levels of violence unseen since the Feb.27 cease-fire, engineered by the U.S. and Russia, took hold. The cease-fire doesn’t include the Islamic State group and its rival al-Qaida branch in Syria, the Nusra Front.

The Islamic State group claimed responsibility for the suicide bombing. The Aamaq news agency, linked to the extremist group, said fighters detonated an explosives-packed vehicle at a gathering of government troops in the suburb of Sayyida Zeinab.

The Syrian pro-government Al-Ikhbariya TV station showed footage of a slight depression on a road near a checkpoint where the bomb was said to have gone off. The wreckage had already been removed.

Al-Manar TV, run by Lebanon’s Hezbollah militant group, said eight people were killed in the blast. The Shiite militants have a heavy presence in the suburb. The Syrian Observatory for Human Rights, an activist-run monitoring group, gave the same toll. Syrian state TV said seven people were killed and 20 wounded.

The heavily guarded shrine to Sayyida Zeinab, the daughter of the first Shiite imam Ali and granddaughter to the Prophet Muhammad, receives thousands of Shiite pilgrims each year.

Allies of the embattled Damascus government have mobilized Shiite fighters from Iran, Iraq and Lebanon to fight on the side of President Bashar Assad’s forces on the grounds of defending the shrine and preserving the country’s religious plurality.

A previous bombing in the Sayyida Zeinab suburb, claimed by the Islamic State group, killed some 130 people in February.

Aleppo, Syria’s largest city and onetime commercial center, has been bitterly contested since 2012. Opposition groups control the eastern part of the city but have been boxed-in by government forces, and are now linked to the surrounding area by a single narrow corridor to the northwest.

The government and its opponents exchanged blame for violations that have left over 70 people dead in Aleppo alone since Friday. A government airstrike on a vegetable market in neighboring Idlib province left at least 44 people dead last week.

The U.N. envoy leading indirect talks in Geneva between the warring parties warned that the cease-fire was in trouble but said he would continue the latest round of talks until Wednesday, despite an opposition walkout last week.

Following the meeting with de Mistura, Syria’s U.N. ambassador Bashar Ja’afari blamed the violence in Aleppo and Damascus on “terrorists” bent on foiling the cease-fire and the peace talks and which he said were backed by regional rivals Saudi Arabia and Turkey. He said his government has asked the U.N. Security Council and the Secretary-General “to take immediate steps to help the Syria government to combat terrorism in accordance with relevant U.N. Security Council resolutions and to hold accountable the governments of states sponsoring terrorism about such a bloody escalation.”

Despite the violence, de Mistura said there was “modest but real” progress in delivering humanitarian aid to besieged and hard-to-reach areas— one of the main intentions of the cease-fire agreement.

On Monday, the International Committee of the Red Cross said it is delivering its second humanitarian aid convoy in as many weeks to an opposition-held town under siege in central Syria.

ICRC spokesman Pawel Krzysiek says Monday’s aid convoy to the town of Rastan, in Homs province, includes 35 trucks carrying food, delivery kits for pregnant women and anti-lice shampoo. The delivery is being carried out in partnership with the U.N. and the Syrian Red Crescent.

The town has been under siege since January. It received its first batch of humanitarian aid in over a year on Thursday.

The population of Rastan has doubled to 120,000 because of the influx of people fleeing nearby fighting.

The Syrian uprising began with mostly peaceful protests in 2011, but a brutal government crackdown and the rise of an armed insurgency eventually plunged the country into a full-blown civil war. The fighting has killed more than 250,000 people, according to the United Nations, which stopped tracking casualties several months ago.