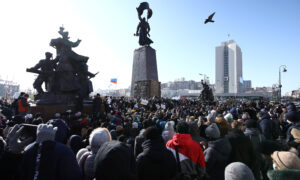 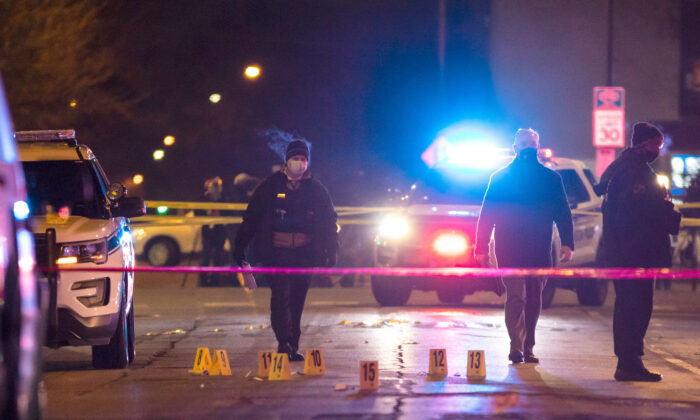 Chicago and Evanston police investigate a crime scene after a gunman went on a shooting spree before being killed by police during a shootout in Evanston, Ill., on Jan. 9, 2021. (Ashlee Rezin Garcia/Chicago Sun-Times via AP)
US News

At Least 24 Shot, 5 Fatally, Across Chicago Over the Weekend: Police

At least 24 people were shot, including five fatally, between Friday night and Sunday morning in Chicago.

Police in Chicago said the weekend’s first fatality occurred at 8:55 p.m. Friday after a 26-year-old man was shot in the head on South Kenneth Avenue, reported the Chicago Sun-Times.

An hour later, a woman was found dead in an alley around East 118th Place, officials said. She had been shot in the head, according to the paper.

About a day later, a man was found dead in a burning vehicle on South Yale Ave., according to police.

At around 12:50 a.m. on Sunday, a 24-year-old male was shot several times and killed around South Paulina Street, officials told the paper.

And at around 1  a.m., the city’s fifth weekend fatality was recorded when a 39-year-old man was shot and fatally wounded during a gathering in the 1100-block of West 104th Street, according to the paper, citing the Chicago Police.

Last weekend, at least 23 people were shot, including six fatally, in the city.

Earlier this month, activists in Chicago criticized the city’s response, saying that the COVID-19 pandemic isn’t to blame. Some officials, including Chicago Mayor Lori Lightfoot, have said the pandemic has exacerbated crime.

“We need to stop blaming COVID-19 for the uptick in gun violence in Chicago,” Tio Hardiman with Violence Interrupters said. “For the entire year of 2020, I’ve been trying to reach out to Mayor Lori Lightfoot to sit down with her.”