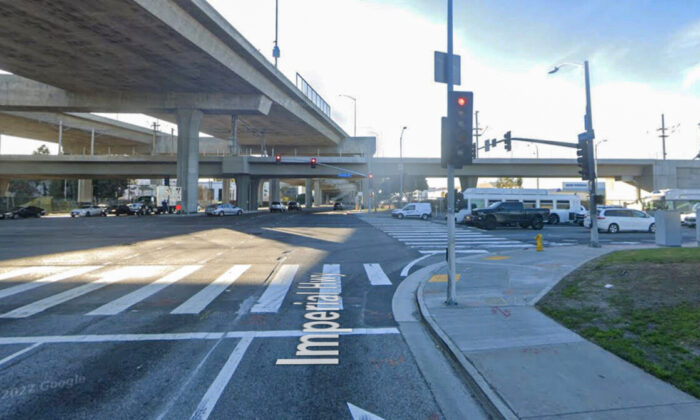 The Imperial Highway near the Los Angeles International Airport in El Segundo, Calif., in February 2022. (Google Maps/Screenshot via The Epoch Times)
Southern California

LOS ANGELES—Twenty people were injured, with seven being transported to the hospital, following a bus collision with a parked tractor-trailer in El Segundo on Monday morning, according to authorities.

The crash involving a Los Angeles Department of Transportation bus took place near the Los Angeles International Airport on the eastbound lanes of Imperial Highway and Douglas Street.

Three patients, including the driver of the rig, are in critical condition, according to El Segundo Fire Chief Deena Lee. Two patients sustained moderate injuries while another two patients had minor injuries, Lee said. She added that these patients are being treated at the hospital.

In addition to the seven patients, 13 other people riding on the L.A. city commuter bus sustained minor injuries but did not want to be taken to the hospital, according to Lee.

According to reports, at 8:23 a.m., a big rig was parked and offloading a scissor lift when the bus crashed into the rig in the 5600 block of West Imperial Highway. The bus was flipped on its side.

The El Segundo Police Department is investigating the crash, Lee said. The El Segundo, Manhattan Beach, Redondo Beach and Los Angeles fire departments responded to the incident, according to Lee.