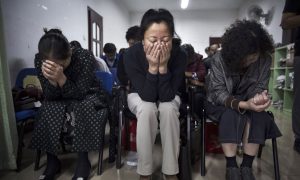 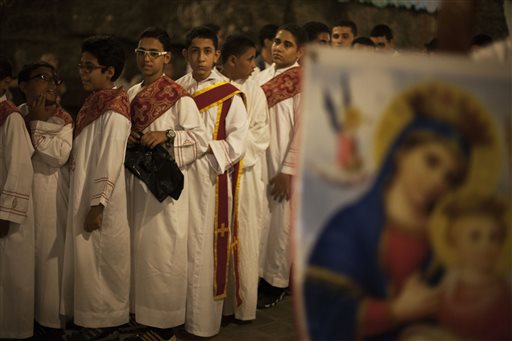 Egyptian youths line up before a procession at Al-Mahraq monastery in Assiut, Upper Egypt, Tuesday, Aug. 6, 2013. Islamists may be on the defensive in Cairo, but in Egypt's deep south they still have much sway and audacity: over the past week, they have stepped up a hate campaign against the area's Christians. Blaming the broader Coptic community for the July 3 coup that removed Islamist president Mohammed Morsi, Islamists have marked Christian homes, stores and churches with crosses and threatening graffiti. (AP Photo/Manu Brabo)
Africa

CAIRO—Masked gunmen in central Libya kidnapped 13 Coptic Christians on Saturday after seven were abducted days earlier, said a witness and a priest, in a new wave of assaults against Egypt’s Christians working in the war-torn North African nation plagued with Islamic extremists.

Witness Hanna Aziz told The Associated Press that the gunmen in the Libyan city of Sirte went room to room in their residence at 2:30 a.m. Saturday and asked for identification papers to separate Muslim workers from Christians. Aziz says the gunmen handcuffed the Christians and drove away with them.

“They were 15 armed and masked men who came in four vehicles. They had a list of full names of Christians in the building. While checking IDs, Muslims were left aside while Christians were grabbed,” Aziz said, adding that he survived simply because he didn’t open his door.

“I heard my friends screaming but they were quickly shushed at gunpoint. After that, we heard nothing,” said Aziz who said he has three relatives among the hostages. “I am still in my room waiting for them to take me. I want to die with them,” he added.

Abu Makar, a Coptic priest in the workers’ hometown of Samalout in southern Egypt, confirmed the abduction took place. He said seven other Coptic Christians from Samalout were taken while trying to escape Sirte a few days earlier.

Sirte has become a safe haven for extremist Islamist groups like Ansar al-Shariah, blamed for the September 2013 attack on the U.S. Consulate in Benghazi that killed U.S. Ambassador Chris Stevens.

The abduction came on the heels of the killing of a Coptic couple — who used to work as doctors in Sirte— and their daughter.

The Egyptian Foreign Ministry said in a statement that it is following up on the case, urging Egyptians in the city to stay indoors until the government can facilitate a safe return home. Ministry Spokesman Badr Abdel-Atti said that Egypt can’t send a diplomatic mission to Libya because “many of the regions are out of state control.” Egypt closed its mission in Tripoli last year and withdrew its ambassador after his own abduction at the hands of militiamen, disgruntled at the arrest of a top Islamic militia commander in Egypt.

In March, the bodies of seven Christian Egyptians were found in the eastern city of Benghazi, killed by gunshots to the head while handcuffed.

In March 2013, dozens of Coptic Christians were tortured inside a detention center run by a powerful militia in Benghazi. The men, who were suspected of proselytizing, were rounded up in a market by gunmen who checked their right wrists for tattoos of crosses, a common mark worn by many Egyptian Christians.

Islamic extremist militias have been targeting Christians, women, journalists, refugees and those considered former loyalists of Moammar Gadhafi, who was toppled and killed in Libya’s 2011 civil war.

Egyptians became a top target for the militias after the Egyptian government began supporting the Libyan army battling Islamic militants.

“We are witnessing a pattern of persecution against Christians in Egypt; I fear for the lives of the hostages,” said Magdi Malak, a Cairo-based activist involved in the case.