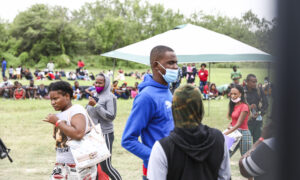 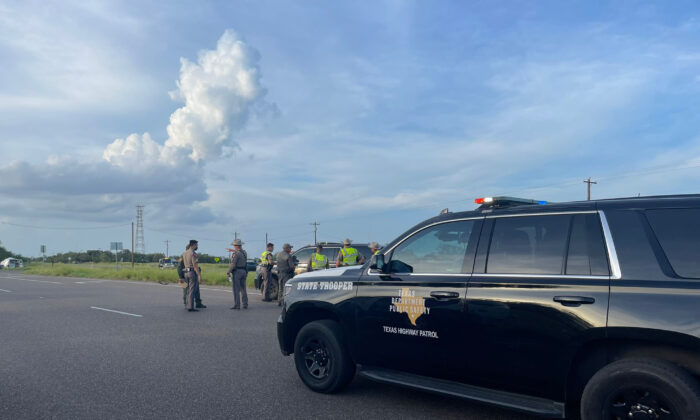 Emergency responders work at the scene of a deadly van crash in Encino, Texas, on Aug. 4, 2021. (Courtesy of KRGV)
Texas

At Least 10 Dead After Van Carrying Migrants Crashes in Texas

At least 10 people are dead after an overloaded van carrying suspected migrants crashed on a remote highway in Brooks County, Texas, according to reports.

The crash occurred shortly after 4 p.m. at the intersection of US 281 and Business Route 281 in Encino, a town of 140 people. The Texas Department of Public Safety (DPS) is investigating the incident.

The van carried 30 people, including the driver, but was designed to hold just 15 people, Sgt. Nathan Brandley of the Texas DPS said, according to The Associated Press.

The driver was speeding and lost control of the top-heavy van when he tried to veer off the highway onto Business Route 281. The van hit a metal utility pole and a stop sign.

Authorities did not immediately release information about the registration status and ownership of the van, according to the news wire.

At least 10 were killed in the crash, which occurred several miles from a U.S. Border Patrol checkpoint.

Brandley said that the 20 people who initially survived have serious to critical injuries.

They have been transported to various local hospitals, reported The Monitor.

Brooks County Sheriff Benny Martinez told the outlet that the van was not being pursued.

He added that the passengers comprised 27 men and three women, and that the deaths involved one woman and nine men, three of whom are from Mexico, one from Guatemala, and the rest from Honduras. The driver died at the scene.

The passengers are suspected to be illegal immigrants. Texas authorities were working with the Mexican consulate to identify the victims, Brandley said.

He added said the identities of the 30 passengers will be withheld at least until their relatives are notified.