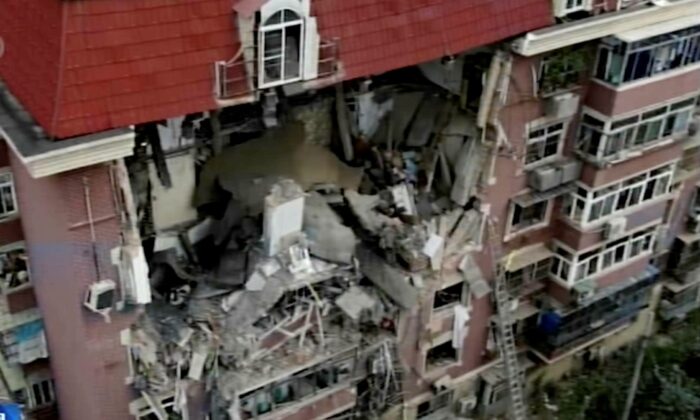 In this image taken from video footage, an aerial shot shows a partially collapsed building in the eastern Chinese port city of Tianjin, China, on July 19, 2022. (CCTV via AP)
China

One person has died in a gas explosion that injured 12 others at a six-story residential building in the Chinese port city of Tianjin, state media said Wednesday.

A trapped person who had been pulled out on Tuesday at 5:40 p.m., more than 10 hours after the morning blast, had weak vital signs and died after being taken to a hospital, according to a Tianjin Daily report posted by the Tianjin government on social media.

The event remains under investigation, but it appears to point to the deterioration of infrastructure.

Photos from the scene showed upper stories of the building caved in, but no obvious damage to neighboring units.

Tianjin lies roughly an hour by train from Beijing.

A massive 2015 explosion at a chemical warehouse in Tianjin killed at least 173 people, most of them firefighters and police officers.

A 2013 blast in the northeastern port of Qingdao killed at least 62 people when underground pipelines ripped open following a leak.

Smaller incidents have followed since, including explosions at a hotel in the northeastern city of Shenyang and a residential community in the central city of Shiyan that left a combined at least 28 people dead.

Building codes are also loosely enforced in rural areas and suburbs, with additional levels added to homes and businesses that lack the structural integrity to support them. In April, a block that included apartments and restaurants collapsed in the city of Changsha, killing at least 53 people.