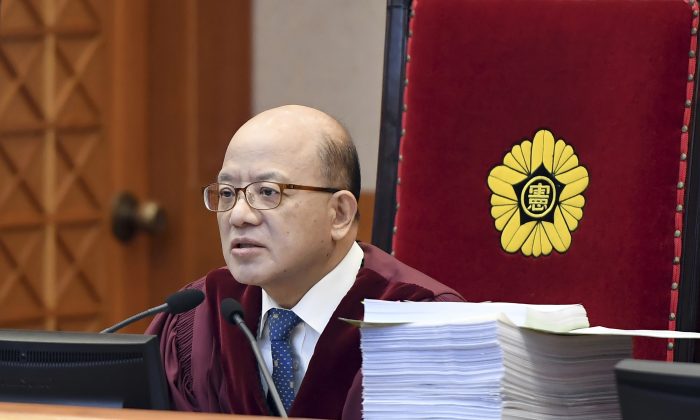 While the lawmakers, functioning as prosecutors in the trial, argued Park should be removed from the presidency, her lawyers said the accusations lacked evidence. Park is accused of colluding with a longtime friend to extort money and favors from companies and allowing her friend to interfere with government affairs.

As the impeachment hearing was taking place, Park’s friend, Choi (pronounced Chwey) Soon-sil, appeared in another court in Seoul where she told the judge she denies the allegations against her. Also in the courtroom were former presidential secretaries Ahn Jong-beom, who allegedly pressured companies which gave tens of millions of dollars to foundations Choi controlled, and Jung Ho-sung, charged of passing government secrets to Choi, such as information on ministerial candidates.


The chief prosecutor in the impeachment trial, lawmaker Kweon Seong Dong, said Park (pronounced Bahk) abused her position by “broadly and gravely” violating the constitution to commit corruption and turn state affairs into a profit tool for her friend.

He said Park must be removed from office to repair the damage she had caused to the country’s democracy.

Parliament voted on Dec. 9 to impeach Park, suspending her powers and making the prime minister the government caretaker. The Constitutional Court has less than six months to decide if Park should be removed or reinstated, and if it removes her, an election has to be held within 60 days.

Park’s lawyer, Lee Joong-hwan, said the accusations stated in the impeachment bill “lack evidence and fail to make legal sense” because they were based on allegations and media reports, not criminal convictions.

The hearing proceeded without Park, who refused to testify for the second time and cannot be forced to do so. The court had planned to hear testimony from four of Park’s former and current aides suspected of helping Choi, but only one appeared.

Besides the corruption allegations, the court will also hear accusations included in the impeachment bill that blamed Park for restrictions on media reporting and for government inaction during a 2014 ferry sinking that killed more than 300 passengers.

Yoon Jeon-chu, who has been Park’s aide since 2013, did not answer directly most of the questions asking about her interactions with Choi and what Park did on the day of the ferry disaster.

The court said it was not able to deliver subpoenas to former aides Ahn Bong-geun and Lee Jae-man, who both worked with Park for nearly 20 years since her days as a lawmaker, and said another current aide, Lee Yeong-seon, asked to appear later.

Park has publicly apologized for putting trust in Choi, but denied accusations that she colluded with her friend in criminal activities. Prosecutors also indicted Choi’s niece and several former government and presidential officials who allegedly assisted Choi in manipulating state affairs and exploiting her connections with Park to amass an illicit fortune.

Park’s lawyers may prefer her not to testify because their chief argument is that the accusations against Park have not been fully proven, said Han Sang-hie, a law professor at Seoul’s Konkuk University. Park rejected requests by state prosecutors to question her and has yet to be questioned by the special prosecution team that has taken over the inquiry.


During Thursday’s hearings, Seo Seok-gu, another Park lawyer, argued that the investigation into Park was biased and suggested that the massive protests that pushed lawmakers to impeach her were influenced by groups sympathetic to North Korea.

Seo accused news organizations that reported on the scandal of demagoguery that he said threatens to make democracy “very dangerous,” and compared Park’s impeachment to the “unjust” deaths of Jesus Christ and ancient Greek philosopher Socrates.