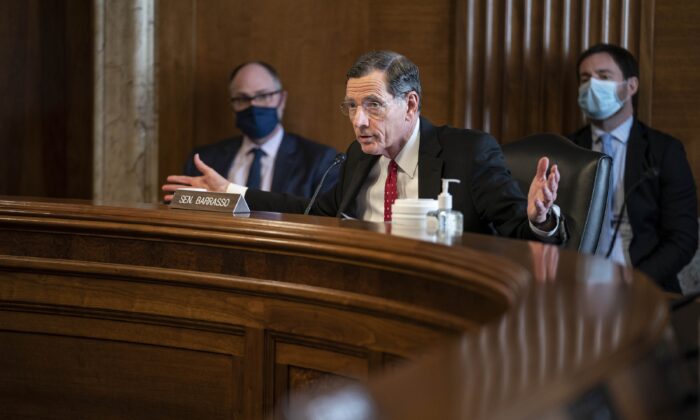 On Jan. 11, the Senate Committee on Energy and Natural Resources (ENR) held a hearing on hydropower, prompting senators to comment on factors that may threaten the continued existence and expansion of the renewable energy source.

In some countries, hydropower is a substantially larger source of electricity. For example, hydropower provides up to 95 percent of power produced in Norway.

“A country well known for its high mountain plateaus, abundant natural lakes and steep valleys and fjords, Norway’s topography lends itself perfectly to hydropower development,” the International Hydropower Association notes in its article on Norway.

“Unlike other sources of renewable energy, hydropower is available when it is needed. That means hydroelectric dams can provide power whether it is day or night—whether the wind is blowing, the sun is shining, no matter what. Hydropower can once again be our largest source of renewable energy if we maintain our existing hydroelectric dams and encourage the installation of turbines on our nation’s non-powered dams,” Barrasso said.

Hydropower is in fact vulnerable to winter weather. Frazil ice, a form of ice made up of thin ice crystals suspended in water, and other kinds of ice can interfere with hydropower production, as described in a 2013 technical paper that details the impact of ice on hydroelectric plants.

Barrasso pointed out that fewer than 3 percent of American dams currently produce electricity.

“The glacial pace of permitting is a significant barrier to private sector investment in hydropower,” he said. “I encourage the committee to explore meaningful reforms to the hydropower licensing process.”

“Unlike most other renewable energy sources, hydropower generation provides baseload electricity,” he said in his own written statement. “It’s also flexible which means that the generation capacity is available when we need it, and it has the ability to respond to changing grid conditions and adjust output accordingly. That makes hydropower unique and valuable for maintaining grid reliability as more intermittent resources come online.”

Like Barrasso, he pointed out that a tiny fraction of dams in the United States generate power. He said that many dams in his home state of West Virginia and elsewhere can likely be retrofitted to produce hydroelectricity.

While Manchin’s statement didn’t emphasize regulatory burdens, it did tout the November 2021 infrastructure bill. He described the bill as “a historic investment in new and existing incentives for new hydropower production, efficiency upgrades, and infrastructure and environmental improvements.”

Senators at the forum heard testimony from multiple witnesses, including the commissioner of the Bureau of Reclamation within the Department of the Interior, Camille Calimlim Touton.

“Our hydropower system … faces tremendous challenges due to the historic drought facing the West. This can be seen most prominently in the Colorado River Basin, which is experiencing a 22-year drought, resulting in Lakes Mead and Powell reaching their lowest levels since initial filling decades ago,” Touton testified in her written statement. She added that the falling lake levels could reduce power generation from the Hoover Dam.

“As with any energy resource, the development of hydropower across the West in the last century has created significant benefits, while also significantly impacting the environment and riverine communities, including tribal communities.”

Ongoing negotiations between the United States and Canada over the Columbia River Treaty, which yielded a number of dams on the Canadian side of the border, have drawn renewed attention to the human costs of large-scale hydroelectric projects.

“The building of the dams in Canada flooded those valleys—and those valleys were made up of small communities,” Barbara Cousens, an emerita professor at the University of Idaho, told The Epoch Times. “The valleys were the only place for agriculture, because then you [only] have steep, forested mountains. So it really took away that livelihood for the local communities.”

Malcolm Woolf, president and CEO of the National Hydropower Association, also spoke before the committee. He emphasized that the imminent expiration of many hydropower licenses places much of U.S. hydropower “at risk.”

“The uncertainties surrounding the length and cost of the relicensing process threaten the availability of the renewable energy provided by the existing hydropower fleet. Relicensing takes, on average, 7.6 years to complete, with re-licensing for many facilities lasting over a decade,” Woolf testified in his written statement.

“The role of state and federal resource agencies and tribal authorities need to be respected, but so do the deadlines established by Congress,” Woolf said when questioned by Barrasso about how he might reform licensing, relicensing, and permitting. “The second thing we need is to rein in the agency overrun. They are imposing requirements on our facilities that are not related to the facilities’ effects—building an amphitheater for the Boy Scouts or feeding a third party’s livestock.”