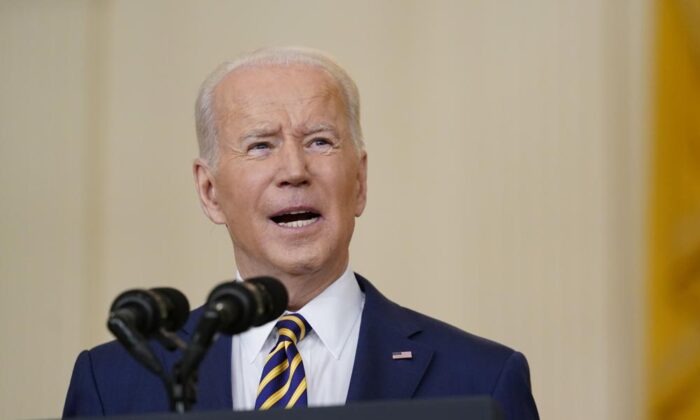 President Joe Biden speaks during a news conference in the East Room of the White House in Washington, on Jan. 19, 2022. (Susan Walsh/AP Photo)
Executive Branch

At End of First Year in Office Biden Blasts Republicans, Predicts Russia ‘Will Move In’

President Joe Biden continued to blame Republican opposition for impeding his domestic agenda and predicted that Russia “will move in” on Ukraine during his second formal press conference as president on Wednesday, the eve of his first year in office.

During the roughly two-hour session with reporters, Biden discussed the immediate issues of inflation, attempts at diplomacy with Russia and his stalled legislation in the Senate. He also answered questions related to his administration’s performance in its first year—discussing the COVID response, the military exit and evacuation of Afghanistan and his campaign promise to unite the country.

“I didn’t overpromise,” Biden said. “But I think if you take a look at what we’ve been able to do you’d have to acknowledge that we made enormous progress.”

Biden touted federal efforts to distribute the vaccine for the CCP (Chinese Communist Party) virus, a decline of unemployment to 3.9 percent, and the passing of a $1.9 trillion bipartisan infrastructure plan as chief accomplishments.

He said in his next year in office he will do more traveling to promote elements of the infrastructure bill and get involved in off-year elections. He also says he plans to bring in more outside experts from academia and other areas to assist in decision making going forward.

Biden said he is not, however, planning any major leadership changes, despite ever-changing and often confusing messaging from the administration on what is required of and recommended for Americans as it relates to COVID precautions going forward.

“The messages, to the extent that they’ve been confusing, is because the scientists—they’re learning more,” Biden said.

“This is a brand-new virus; a brand-new phenomenon,” he added. “Some of it was more deadly; other was more communicable. This is an unfolding story.”

But a year into his presidency, Biden faces inflation which has risen to a 40-year high of 7 percent, record COVID cases driven by the emergence of the Omicron variant, policy losses both in Congress and the Supreme Court, and the looming threat of a Russian invasion into Ukraine.

Biden reiterated to reporters Wednesday that the decision of whether Russia invades Ukraine is entirely up to Russian President Vladimir Putin.

“I’m not so sure he is certain what he is going to do. My guess is he will move in,” Biden said. “He has to do something,”

Russia has amassed roughly 100,000 troops along its border with Ukraine and in Russian-annexed Crimea in recent weeks, and a series of high-level talks between the United States and Russia have yet to ease tensions.

Biden has threatened sanctions if Russia invades and said Wednesday it would be a “disaster” for Russia if they choose to do so, but also suggested a “minor incursion” would elicit a lesser response than a full-scale invasion.

On the domestic front, Biden took aim at Republicans, despite his party having majorities in both the House and Senate, repeatedly calling into question the party’s current platform and saying former President Donald Trump still holds sway of the party.

“I did not anticipate that there would be such a stalwart effort to make sure that the most important thing was that President Biden didn’t get anything done,” Biden said. “Think about this: What are Republicans for? What are they for?”

Biden’s voting bills are currently stalled in the Senate as is his signature “Build Back Better” social spending plan—which he concedes may need to be broken up if it moves forward.

Both bills face opposition from all Republicans. Democratic Sens. Joe Manchin (D-W.Va.) and Kyrsten Sinema (D-Ariz.) oppose measures in the spending plan and are against ending the filibuster rule in order to get the voting bills passed.

During a press conference earlier the same day, House Democratic Caucus Chairman Hakeem Jeffries (D-N.Y.) also discussed the president’s performance after a year in office. Jeffries applauded the president and suggested that the many crises that have battered the nation during Biden’s first year in office were beyond his control.

Since he took office in Jan. 2021, Biden has presided over skyrocketing gas prices, nearly-unprecedented inflation, international supply chain issues, and a disastrous Afghanistan withdrawal that left many Americans and American allies trapped in the faraway desert country.

For many Americans, who have seen their money lose value even as gas prices increase exponentially, life under the Biden administration has been financially disastrous.

But according to the House Democratic caucus leader, Biden’s presidency has been a great success. Specifically, Jeffries applauded the $1.9 trillion American Rescue Plan, a CCP virus relief bill passed in early 2021 with no GOP support, and the $1.2 trillion infrastructure bill that passed Congress by a bipartisan vote.

Jeffries pointed to various aspects of the two bills, particularly the American Rescue Plan’s child tax credit and the state-by-state allotments in the infrastructure bill.

Biden, Jeffries ruled, “has had a very good first year under difficult circumstances.”

However, public opinion polls indicate that an overwhelming majority of Americans disagree with Jeffries’ sanguine assessment. Since taking office, Biden’s popularity has plummeted, falling several points lower than Trump at the same time in his presidency.

Biden’s popularity hit its peak during the beginning of his presidency according to Rasmussen’s daily presidential tracking poll.

On May 30, 2021, Biden enjoyed an approval rating of 55 percent, far exceeding Trump’s 44 percent approval rating at the beginning of his term. But since then, these numbers have only worsened for Biden. While the numbers have fluctuated up and down at various points, the general trend of the data has been ever-decreasing popularity.

On Jan. 14, Biden’s approval rating hit its lowest point yet, with only 38 percent of Americans thinking the former senator was doing a good job in the White House. On Jan. 14, 2018 by contrast, Trump enjoyed a 46 percent approval rating.

While Biden’s approval rating has rebounded a bit since then, sitting at 41 percent on Jan. 19, 2022, this still puts Biden four points below Trump.

A Quinnipiac University poll was even more concerning for Biden, finding that only 33 percent of voters approved of the octogenarian president.

A separate Rasmussen poll has also found that if the 2020 election were held again this month, 46 percent of voters would pick Trump while only 40 percent would reelect Biden.

Most shockingly, the poll found that voters affiliated with neither party prefer Trump overwhelmingly: 45 percent of these independents say that they would vote for Trump, while only 29 percent say that they would vote for Biden. Given the crucial importance of the independent vote for electoral victory, this is an ominous portent both for the president and his party, which will face a tough midterm battle in November.

Whatever the reasons for these numbers, they make clear that voters overwhelmingly disapprove of Biden’s short time in office, and that most think the president has been a poor leader.