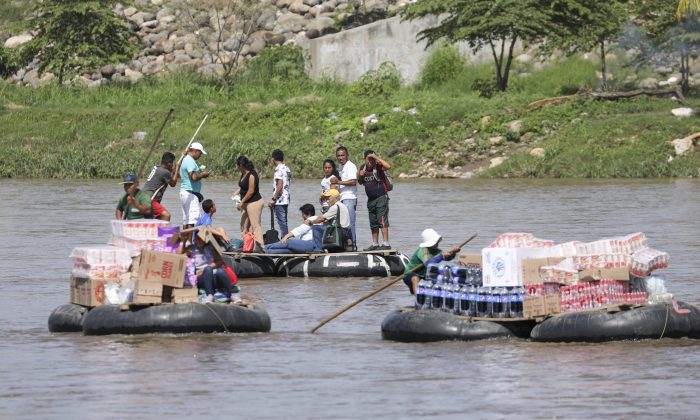 At Busy Southern Mexico Border, No Troops to Be Found

TECUN UMAN, Guatemala—One of the busiest border crossings between Mexico and Guatemala has yet to see Mexican National Guard troops. In the southeast of Mexico, across the Suchiate River, goods and people flow all day long between the two countries.

But there is still no sign of the 6,000 troops that the Mexican government said it would deploy after President Donald Trump threatened to impose escalating tariffs if Mexico did not move to secure its southern border.

The tariffs were set to start on June 10, but Mexican officials averted them with an agreement that included a promise to secure its 540-mile southern border with Guatemala.

Mexican President Andrés Manuel López Obrador said a new National Guard force will be formed by June 30, of which 6,000 troops will be posted to the Mexico–Guatemala border. The National Guard will consist of members from Mexico’s military police, naval police, federal police, and the National Migration Institute, according to Luis Crescencio Sandoval González, Mexico’s secretary of defense.

“We are covering the southern border, and we are helping with the effort of the National Institute of Migration, which now has the power to be securing people, and we are supporting them to be able to carry out this activity,” González said at a press conference on June 24.

But in the southeast of Mexico, the shores of the Suchiate River by Hidalgo City are void of military might.

Eduardo Gallardo Gonzalez, secretary of the department of municipal protection in Suchiate, Hidalgo City, said they are still expecting the National Guard.

Gonzalez said the military and Navy have always conducted periodic patrols of the river border, but they’re not a constant presence, and patrols haven’t increased since the deal with Trump was reached.

A Mexican official told The Epoch Times on background that the military ran a test on the bank of the Suchiate by Hidalgo City on June 16 and 17. The official said the test was timed, in part, to coincide with the Guatemala general election on June 16, during which Guatemala authorities asked for assistance along the border. The result is that the government decided to use both male and female National Guard troops, and that they will be unarmed, the official said.

Data from Mexican immigration authorities shows that more than 26,800 migrants were apprehended in this area after crossing illegally in the first four months of 2019—making up half of the total apprehensions along the border.

However, with the United States apprehending more than 130,000 illegal immigrants in May, mostly from Central America, it’s clear that most of the migration at Mexico’s southern border is happening outside of legal channels.

The crossings over the Suchiate River from Tecun Uman into Mexico look nothing like in December 2018 when the international bridge was heaving with thousands of migrants as the second large caravan rammed its way through.

Now, the migrants cross in small groups and usually just in the early morning or late evening.

An official at the main immigration detention center in Tapachula, Mexico, 25 miles from the Hidalgo City crossing area, said the center is receiving between 200 to 500 new illegal immigrants each day on average—these are the ones being apprehended in the state of Chiapas and those who wish to transit legally.

“Normally, the majority of the people are from Central America,” said Gonzalez. “But, now we are also seeing Haitians and Cubans. The majority of them cross the river on a tube raft or wade across, then they walk 40km [25 miles] to Tapachula.”

The majority of the 5,000 migrants currently at the Tapachula detention center are from Haiti and Africa.

Uncertainty Until Mexican Plan in Place

The caravans opened the floodgates to sustained, high levels of migration toward the United States, said Herbert Ivan Alayn Ortega, a member of the municipal council of Ayutla, San Marcos, Guatemala. He is based in Tecun Uman.

Before the caravans, Ortega said the largest groups that passed through Tecun Uman were no more than 50 people.

“Eight months ago, because of the caravan, the migrant flow went up steeply,” he told The Epoch Times on June 25. “We as a border city here in Tecun Uman, we have always lived with the migrant situation. We have seen people from India, Asia, of many nationalities—besides the Central American people we see all the time.”

Ortega said the migrants continue to cross illegally at the five main crossing points in the area, near the international bridge—Armadillo Pass, Coyote Pass, Palenque, Cruz del Migrante, and Cascajo.

A lot of speculation and uncertainty surrounds Mexico’s new security measures. If, and when, the measures become apparent, however, new smuggling routes will be set and the migration will continue, Ortega said.

At 5:30 a.m. on June 26, a group of six Salvadorans were walking back to Tecun Uman from the river after trying to get across to Mexico. They said Mexican police on the other side were demanding money—which they didn’t have, so they had to retreat. It’s likely they will try again under the cover of night.

Other lesser-used routes are further north through the jungle, a more difficult and dangerous journey through drug trafficking territory. These may become more commonly used, depending on Mexico’s moves.

With translation by Jorge Rodriguez.