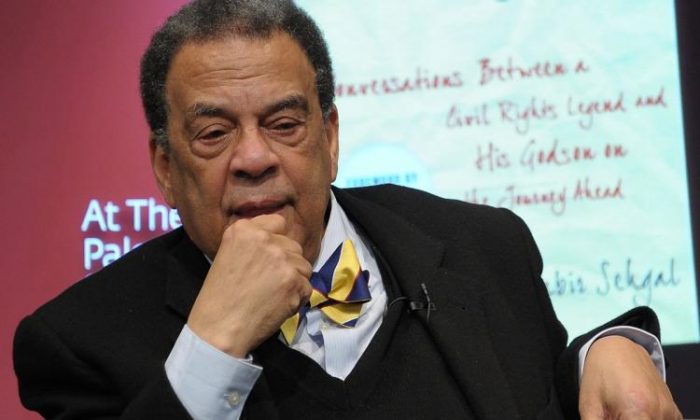 Former U.N. ambassador and Atlanta mayor Andrew Young advocates turning to the business world to make growth happen. He spoke at an Atlanta event last week marking publication of his new book with Ernie Suggs, "The Many Lives of Andrew Young." File photo from 2015. (Michael Loccisano/Getty Images)
US

Having just turned 90, a milestone marked with the release of a biography, Andrew Young has a few lessons for young people inspired by his legacy.

One boils down to “Capitalism, baby.” Another is, “You have no idea what hard times are.” A third might be, “You can work with Republicans. I do.”

At a book party in Atlanta’s Millennium Gate Museum last week, Young told wellwishers about the life recounted in “The Many Lives of Andrew Young,” penned by Ernie Suggs, a reporter for the Atlanta Journal-Constitution.

It’s a coffee table book with plenty of text and hundreds of photos, many from the voluminous family archives created by Young’s mother.

His life touches a tremendous amount of history, from the civil rights movement to Selma, St Augustine, and the March on Washington. From Martin Luther King’s assassination in Memphis to the Atlanta mayor’s office to the United Nations. To the crowning achievement of landing the 1996 Olympics for Atlanta, marking it as a world-class city.

Lessons learned along the way were that the world was a vast place with all kinds of people in it, that they wouldn’t all be on your side, but that they weren’t necessarily against you either. A business leader who once referred to him with the (expletive) word later became a strong supporter.

A life lesson he twice mentioned was growing up in New Orleans, where Young was born in 1932. Whites and blacks mingled more. By his family’s house, he said.

His father explained that the Nazis, with their racial theories, didn’t buy that all humanity was one. “You don’t need to get caught up in their insecurities,” Young said his father told him, along with “racism is a sickness.”

Later, he strove to make Atlanta an international city and to convince its business leaders that’s what it needed to be. Atlanta, whose business leaders saw desegregation as inevitable and got ahead of the wave, called itself “the city too busy to hate” as its growth accelerated in the 1960s and 1970s.

Young would tell foreign leaders that if they were having trouble marketing their goods, they needed to be selling in the United States, and the best place to do that was Atlanta.

“I’ve been to 152 countries and loved every one of them for a while. But it was always good to get back to Atlanta. We don’t always realize how far ahead we are.”

The growth he and other civic and business leaders promoted bore fruit.

Young added that the Atlanta metro economy is $400 billion, twice as big as the rest of Georgia and around the same size as Norway’s.

Atlanta’s business growth was backed by the private sector, which steadily and eagerly bought municipal bonds financing projects like the airport’s expansion. Atlanta’s Olympics didn’t cost local taxpayers a dime, so far, the only Olympics in history that can make that claim, he reminded his listeners.

“It all came from Wall Street,” he said. Every Atlanta mayor has sold at least $1 billion in municipal bonds, which tend to be snapped up before the issues are even made public. He’s never been able to find one to buy himself, he joked.

Few of the millions who watched will forget the thrilling sight of the Olympic opening ceremony in 1996.

The torch was lit in a surprise appearance by aging and iconic boxer Muhammad Ali, trembling with Parkinson’s Disease but still standing erect: a symbol of the nation’s racial struggles and progress, of the New South that Atlanta stood for, and of the new opportunities African-Americans found in a place that had once denied them.

Getting Atlanta picked as an Olympics site wasn’t just a money issue. Young said he buttonholed African heads of state and told them this as he traveled the world and visited their countries to ask for their vote:

“I said, ‘It’s not your fault that your ancestors sold my ancestors into slavery. Now you can make up for it.'”

And Atlanta got their votes.

Young became a minister and had just moved to New York in the early 1960s, buying a house in Queens with his wife Jean to work for the National Council of Churches.

Then he saw on television some civil rights demonstrators, including John Lewis, C.T. Vivian, Diane Nash, and Bernard Lafayette, getting arrested at one of a series of sit-ins to desegregate lunch counters in Nashville, Tennessee.

Young knew he couldn’t sit on the sidelines. His wife was eager to return to the South and took the kids to her mother’s house in Alabama. Young went to Atlanta, got a room at the YMCA, and showed up at King’s office.

Trying to find work for him, King’s secretary Dora McDonald told him, “No one wants to answer Dr King’s mail.”

McDonald looked at him and said, “Atlanta is a dangerous place for a young man.” And it wasn’t necessarily violence she was talking about: “Idle hands are the devil’s workshop, and you’re a man away from his wife.”

“I took them to the Butler Street YMCA. I tried to answer his letters, thinking what he would say or want to say.”

“It was something nobody else wanted to do.”

Beaten Up By KKK

He didn’t know King all that well then, but they became closer in part because their wives had gone to the same high school in Marion, Alabama.

Young didn’t talk about the tragic day in Memphis. In an iconic photo of King’s assassination, Young is one of three people standing over his fallen body, pointing to where they heard the gunshot.

The Civil Rights era was a violent time. Young was beaten up by the Ku Klux Klan in St Augustine, Florida., in 1964. His friend Fred Shuttlesworth’s church was bombed three times in the early 1960s.

In 1960 and 1961, there were more than 60 bombings of black people’s homes in Birmingham, Alabama. The people had taken pride in ownership, spruced their homes up with gardening and landscaping, and some white people didn’t like it.

“When [young] people say things now are worse than ever, I say, ‘You don’t know how things were before.'”

The project would sell $1 trillion in bonds to improve parts of 32 states drained by the river and its tributaries.

He’s lobbying 250 mayors to get them on board with the bond issue idea, based on Atlanta’s success in financing its growth that way.

Republicans lead most of the states affected, and his closest allies in getting some recent enabling legislation, the Water Resources Development Act, through the Senate have been Republicans from Arkansas and Mississippi.

“We’ve got to get the business community and the politicians coordinated,” he said. “Now we’ve got to figure out how to get the Democrats to support it.”