In America, 191 Languages are Endangered or Extinct
0 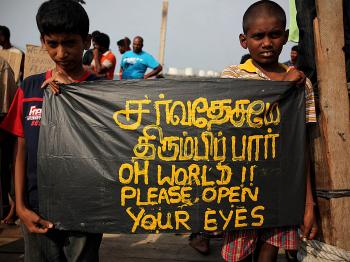 Sri Lankan asylum seekers hold placards during a protest on board a wooden boat demanding the United Nations High Commission for Refugees (UNHCR) to take care of a group of refugees, at Merak seaport on October 28, 2009 in Banten Province, Indonesia. (Ulet Ifansasti/Getty Images)
International

By Shar Adams
Print
SYDNEY—The Australian government has announced that it will suspend processing of new Sri Lankan and Afghan asylum seekers, a move that has shocked refugees and refugee advocates.

There is an air of despair on Christmas Island over the news that processing will be suspended immediately for asylum seekers from war-torn Afghanistan and devastated Sri Lanka.

Curtin University professor Linda Briskman has been on the island for a week and was there when the announcement was made.

“There was quite a degree of shock here,” she told The Epoch Times. “No one was expecting this particular announcement—it seemed to come from nowhere.”

Professor Briskman is worried about the “mental health impact” of future refugees who would be stuck on Christmas Island or in detention in Indonesia indefinitely.

She and her colleagues on the island are already seeing signs of despair, and there are children and families in detention too. “It is just not the place they should be,” she said.

Concerns about the government’s new ruling have been raised by a number of rights and refugee groups, including the Australian Human Rights Commission and Amnesty International.

The federal government, however, is sticking to its position. In a joint press conference, Foreign Minister Stephen Smith and Immigration Minister Chris Evans said they believed Sri Lanka was stabilizing after two decades of conflict and Afghanistan was seeing “durable security.”

“What the pause says is that we think conditions are improving, that the advice from the UNHCR [U.N. High Commission for Refugees] is they’re reviewing their advice and their advice is one of many that we use,” Evans said.

However, UNHCR regional head Richard Towle said he thought that by suspending asylum claims from Sri Lanka and Afghanistan, the Rudd government stood alone in the developed world.

“UNHCR is currently examining the detail and implications of the Australian government’s announcement of a suspension of asylum claims from Afghanistan and Sri Lanka,” he told News Limited.

“I am not aware of any other countries in the industrialized world which have suspensions in place for asylum claims for people from these countries.”

Dr. William Maley, director of the Asia-Pacific College of Diplomacy at the ANU, said that for Hazara Afghans, who make up the majority of refugees coming to Australia, conditions have become more dangerous as the Karzai government attempts to integrate the Taliban into the Afghan community.

Hazaras are distinctive in two respects, he said: one, is their East Asian appearance, as opposed to more common southern European features; the second is that they are Shi'ite Muslims, making them a target for the majority Sunni Muslims, particularly the Taliban.

“They [Hazaras] are not going to wait until mass slaughter occurs before they make some type of move to protect their livelihoods and their lives,” Maley told the ABC.

Briskman said the message she continually receives from the refugees she talks to on Christmas Island is that none of them wanted to leave their countries.

“There are enough reports around to show that Afghanistan and Sri Lanka are far from stable, so people are still very much at risk if there was any question of return,” she said.

Briskman said she has no idea why the government would make such a decision, but she suspected the decision was political.

Thirty years ago, in very similar circumstances, the Fraser government implemented a plan to deal with the influx of refugees following the Vietnam War. It involved process centers in Hong Kong, Malaysia, and Indonesia, and guarantees from the United States, Canada, as well as Australia to take the asylum seekers.

“We took over 180,000 Vietnamese in under that scheme,” professor of Public Law Mary Crock at the University of Sydney told ABC’s Rear Vision.

"We did not introduce temporary protection visas, detention centers in Australia; all of these things were canvassed with the then-Prime Minister Malcolm Fraser, but he said no, we need to treat the situation with humility.”