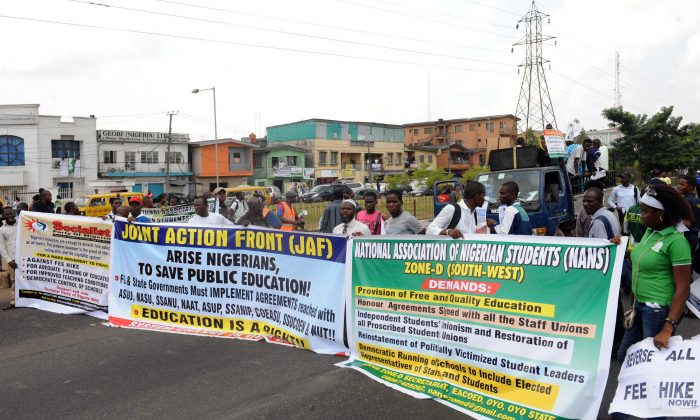 Students and workers carry placards as they march on the Lagos-Ikorodu highway to protest against the suspension of academic activities following a nation-wide strike embarked by lecturers in state-owned universities, on August 13, 2013 in Lagos. Students in collaboration with workers began mass protest to ask for quick resolution of conflicts that led to the on-going strike by lecturers in public Universities. The Academic Staff Union of Universities (ASUU) had, on July 2, declared an indefinite strike over unresolved issues after the government allegedly breached a Memorandum of Understanding (MoU) they both signed in January 2011. (Pius Utomi Ekpei/AFP/Getty Images)
Africa

As the Academic Staff Union of Universities (ASUU) strike continues, parents are growing increasingly frustrated that their children are not in school, and want the union to make public its demands.

Isaac Adua, a civil servant, said that his two boys are at home everyday as the staff strikes.

The union “should make parents and stakeholders understand their demands, know which of them had been met by government and table the outstanding issues in the court of public opinion,” Adua told the News Agency of Nigeria, according to This Day. “This is necessary so that we can decide if they have reasons strong enough to warrant the continuation of their action.”

Adua said that as the strike drags on, it is losing its substance, and that the union members should return to teach classes.

The strike was originally announced on July 1 and negotiations between the government and ASUU have been taking place since then.

Last week, union members said that Nigeria has plenty of money, and should boost the education budget.

But more and more parents and groups are beginning to speak out against the striking members. Now a group of parents wants the demands made public so that the strike can end quickly, with the help of Nigerians.

Dadi Maxwell, a bank executive, said that ASUU should make its demands public so people know what the government has “conceded to them” and “what is left.”

Hajiya Larai Yuguda, a businesswoman, said that the strike troubles her, since her daughter has been at home, without anything to do.

“I fear for her safety and future and I know every parent caught in this war by ASUU understands the situation,” she said. “Let ASUU take a bow when the ovation is still at its loudest because there is no telling what may happen in the nearest future if they remained adamant.’’

Many others have been appealing for the end of the strike, including Nigerian President Jonathan Goodluck.

Goodluck, at the inauguration of the College of Engineering Complex at the Afe Babalola University on Oct. 19, said that ASUU members keeping students out of school was unpatriotic, reported the News Agency of Nigeria.

“I once again appeal to the entire membership of ASUU to pause and ponder on the adverse effect of their action on the future of the vibrant youths of this great nation,” he said. “The collective destiny of tens of thousands of tomorrow’s leaders should not be held hostage to vagaries of labor disputes.”

“I believe that labor has the right to go on strike, but in that strike, any action taken must be built on patriotic zeal,” he added. “In as much as you can go on strike, you must be patriotic to our country. No matter how and what you feel about Mr president and the federal government, I plead with ASUU that for the sake of our students, they should resume classes.”

The strike is prompting students to become desperate, according to some reports. For instance, a female student identified as Jane Okoro attempted to hang herself because of the strike, according to her mother.

“She has been complaining to me about this ASUU strike. She said, at her age, she should have been done with school, and begin to take care of the children and I,” the mother told the Daily Post. “I know other things may have contributed, but ASUU strike may have contributed the most; but for whatever reason, it was devilish for my daughter to have attempted suicide.”

The student was said to have not responded to any questions, other than to say “it was a better option.”

The union has vowed to continue striking until its demands are met.

The union said through a statement obtained by The Leadership on Monday that despite not getting paid under the “no work, no pay” rule, that the strike will continue until the federal government implements the agreement reached between the parties in 2009.

“We will not succumb to blackmail,” said Dr. Ayan Adeleke,  Ilorin Zone Coordinator, in a statement. “We will remain focused and insist that the 2009 agreements be implemented.”