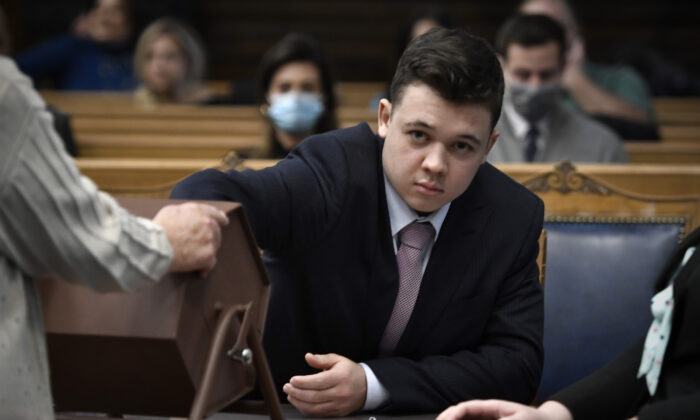 Kyle Rittenhouse pulls numbers of jurors out of a tumbler during his trial at the Kenosha County Courthouse, in Kenosha, Wis., on Nov. 16, 2021. (Getty Images)
Cancel Culture

A coalition of progressive student activist groups at Arizona Student University said they are moving ahead with plans to protest against Kyle Rittenhouse taking classes on campus, even after the university said he is no longer a student.

Rittenhouse, the 18-year-old who was recently cleared of all charges against him after shooting and killing two men and injuring another in self-defense at an August 2020 protest in Kenosha, Wisconsin, previously enrolled in an ASU online nursing program. This non-degree-seeking program doesn’t require applicants to go through the typical admissions process, but allows them to use the classes they take as prerequisite credits to later apply for admission to the university’s nursing school.

In a statement to student newspaper The State Press, however, an ASU spokesperson confirmed that Rittenhouse is no longer taking non-degree classes at ASU, and still “has not gone through the admissions process with the university.”

“There was no action taken by the university,” the statement reads, without providing further details about when or why Rittenhouse withdrew from the online program, which started Oct. 13, a few weeks before his trial began.

The confirmation comes after student groups called on ASU administrators to expel Rittenhouse, who has referred to himself as an ASU student and expressed interest in “going in campus and pursuing a career in nursing.” Progressive groups such as MEChA (Movimiento Estudiantil Chicanx de Aztlán), Students for Socialism, Students for Justice in Palestine, and the Multicultural Solidarity Coalition announced that they would gather and protest on Dec. 1 to get “Kyle Rittenhouse off campus.”

The statement posted by the groups on Instagram referred to him as a murderer, even though he was acquitted on all counts by a jury on Nov. 19.

The protest is nonetheless going to take place as scheduled, since there isn’t any assurance that Rittenhouse will never attend the university online or in person. In fact, Rittenhouse said in a Nov. 24 NewsNation interview that he “took a compassionate withdrawal” from two of his classes because he “got overwhelmed with the trial coming on,” and was planning to “re-enroll in those classes so I can finish them up and pursue my career in nursing.”

In a Nov. 29 statement announcing no changes to their plan, the groups called Rittenhouse a “white supremacist killer” and the two white people who died as “anti-racist protesters.”

“Our priority as student organizations is the safety of students above all else, and in this case safety from fascist violence,” they claimed. “We are calling on the ASU administration, and our president Michael Crow, to stop hiding and denounce white supremacy by denying Rittenhouse any further enrollment at ASU.”

Meanwhile, the ASU chapter of the College Republican United (CRU) continued to voice support for Rittenhouse. In an interview with Fox News, a CRU member William Tolley said the progressive groups are defaming Rittenhouse by calling him a murderer even though he was found not guilty on all charges by a jury.

“They’re clearly defaming him,” the Republican said. “I don’t think their pockets are very deep, but ASU may have to be liable for this at some point.”