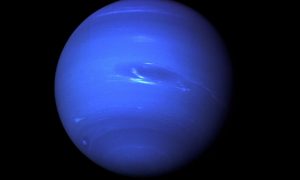 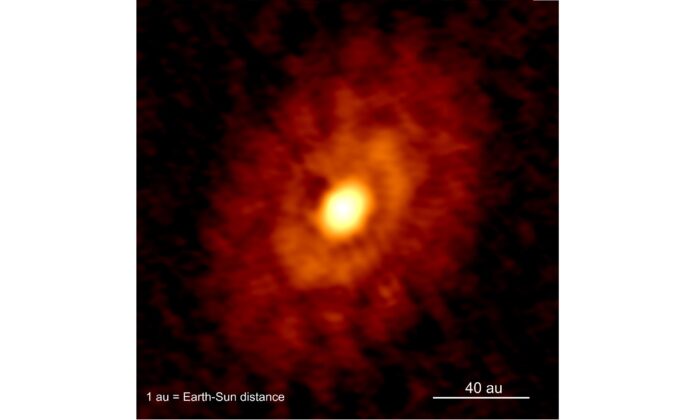 A radio telescope has found evidence that planets might form at the same time as their stars, instead of much later as was previously thought.

The telescope detected dark rings in the disk around a nascent star system. The rings could be the first evidence that a star and its planets are forming and evolving together, potentially upending current theories about planet formation and shedding light on the origin of our own solar system.

The nascent star system is called IRS 63 and is about 470 light-years away in the Rho Ophiuchi star formation region. This region is the closest star-forming region to Earth, and its thick interstellar dust may form the spinning clumps that will eventually collapse into stars.

Using the Atacama Large Millimeter/submillimeter Array (ALMA)—a radio telescope array in Chile that is excellent at detecting early planet formation—a team led by astronomer Dominique Segura-Cox of the Max Planck Institute for Extraterrestrial Physics (MPE) in Germany took a closer look at the star and the dusty cloud around it.

The team found a surprise: two dark concentric rings in the disk that centered on the nascent star. Such rings are what scientists believe to be a signature of planet formation.

“We observed the young protoplanetary disk called IRS 63 and found gaps and rings within the disk, which is indicative of planet formation,” Dr. Ian Stephens, a postdoc of Center for Astrophysics (CfA) in the United States, said in a statement. “Traditionally it was thought that a star does most of its formation before the planets form, but our observations showed that they form simultaneously.”

Dominique Segura-Cox, a postdoc at MPE and the lead author on the paper, added: “The rings in the disk around IRS 63 are so young. We used to have this idea that stars entered adulthood first and were the mothers of planets that came afterwards, but now we see that protostars and planets grow and evolve together from early times like siblings.”

Planet formation is a poorly understood process. The most popular model is the core accretion model, in which grains of dust in the disk gradually grow larger, first via electrostatic force and then via gravitational force. During this process, the protoplanet hoovers up all the material in the disk along its orbital path, creating a dark ring.

“These rings and gaps suggest that we are seeing the earliest evidence of planet formation, and that planets certainly start to form within the first half million years, and probably within the first 150,000 years,” Stephens said in the statement. “Planets, especially planets like Jupiter, started their own formation at one of the earliest stages of the star formation process.”

“Recent dust mass measurements of class II discs also indicate that observed dust depletion could be explained if substantial mass is locked into planetesimals on timescales less than 0.1 to 1 million years,” the researchers wrote in their paper.

The observations could also help scientists understand the formation of our own solar system.

There is growing evidence that Jupiter may have formed beyond Neptune’s orbit in our solar system and then migrated over time to its current location. Observations of IRS 63 indicate that the amount of material in the disk and the young age of the system could create conditions similar to those in our solar system, allowing for similar formation of planets.

“The size of the disk is very similar to our own solar system,” said Segura-Cox in the statement. “Even the mass of the protostar is just a little smaller than the mass of our Sun. Studying such young planet-forming disks around protostars can give us important insights into our own origins.”

The research has been published in Nature.