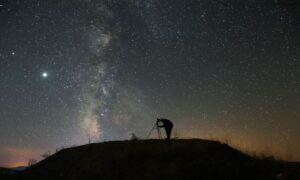 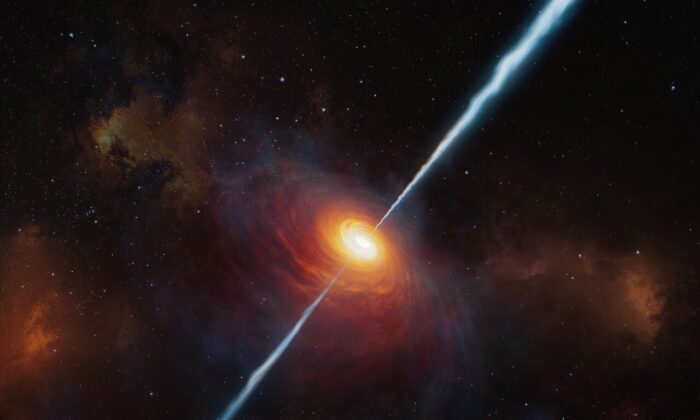 An illustration of the quasar P172+18. (ESO/M. Kornmesser)
Space

Astronomers Discover By Far the Most Distant Known ‘Radio-Loud’ Quasar

Quasars are among the most extreme astrophysical objects in our universe. They contain supermassive black holes and lie at the centers of galaxies, where they quickly consume nearby materials and emit enormous amounts of energy.

A small percentage of quasars also drive powerful radio jets, which can travel at nearly the speed of light.

Now astronomers have discovered a quasar that is by far the most distant one with powerful jets.

Using the European Southern Observatory’s (ESO) Very Large Telescope (VLT), a team of astronomers found the quasar, dubbed P172+18, about 13 billion light-years from Earth, according to a statement.

“As soon as we got the data, we inspected it by eye, and we knew immediately that we had discovered the most distant radio-loud quasar known so far,” Eduardo Bañados of the Max Planck Institute for Astronomy in Germany said in the statement.

P172+18 is powered by a supermassive black hole at the center of its host galaxy. The mass of the black hole is about 300 million times more than that of the sun, and it is consuming nearby materials at a stunning speed, according to the statement.

“The black hole is eating up matter very rapidly, growing in mass at one of the highest rates ever observed,” said astronomer Chiara Mazzucchelli, Fellow at ESO in Chile, in the statement.

The team believes that there could be a connection between the quick growth of a black hole and its jets, similar to P172+18. In particular, they think that the powerful jets might interact with surrounding materials and push them into the extraordinary gravitational pull of the black hole, enhancing the speed at which the black hole swallows the materials.

Because P172+18 is so far from Earth, its light takes billions of years to reach us. Therefore, when we look at this quasar, we are effectively looking back in time to when the universe was only about 780 million years old. The universe is thought to be about 13.8 billion years old now.

As such, understanding distant quasars can help us to infer the evolution of the early universe.

“I find it very exciting to discover ‘new’ black holes for the first time, and to provide one more building block to understand the primordial Universe, where we come from, and ultimately ourselves,” Mazzucchelli said in the statement.

The team believes that P172+18 could be the first of a large population of radio-loud quasars to be found, perhaps at even larger cosmological distances.

“This discovery makes me optimistic and I believe—and hope—that the distance record will be broken soon,” Bañados said in the statement.

The discovery was described in a paper published in The Astrophysical Journal.