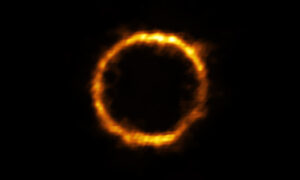 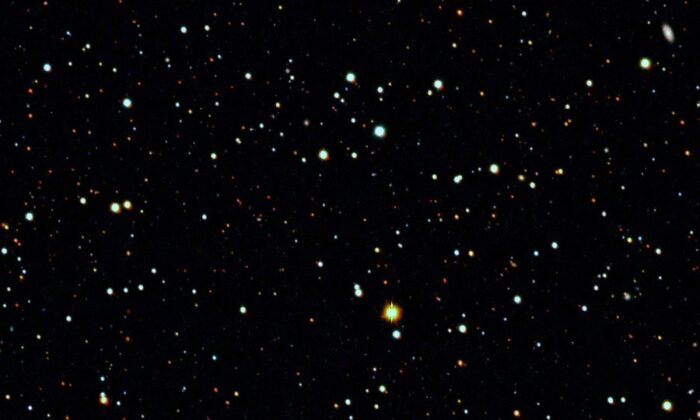 The vicinity of the Tucana II ultrafaint dwarf galaxy, as imaged with the SkyMapper Telescope. (Anirudh Chiti, MIT)
Space

Scientists have discovered that a small galaxy called Tucana II has a much stronger gravitational pull than expected, which means it is likely home to a large amount of dark matter.

Just as the moon orbits the Earth, many satellite galaxies are orbiting our Milky Way. Tucana II is one of them.

These small galaxies, called dwarf galaxies, are thought to be relics of galaxies formed in the beginning of the universe.

Tucana II is an ultrafaint dwarf galaxy about 163,000 light-years from Earth. To astronomers’ surprise, although Tucana II is small, its gravitational pull can be seen very far from its center, indicating that the dwarf galaxy has a tremendous amount of dark matter within.

“Tucana II has a lot more mass than we thought, in order to bound these stars that are so far away,” astrophysicist Anirudh Chiti of MIT said in a statement. “This means that other relic first galaxies probably have these kinds of extended halos too.”

The new findings suggest that the first galaxies in the universe may have been much more massive than previously thought.

Astronomers often use metallicity to estimate the age of galaxies. Metallicity is a measure of metal abundance. Because metals take a long time to form in stars and then propagate through the universe, very early galaxies cannot accumulate large amounts of metals.

Based on the metallicity of Tucana II, it is among the oldest galaxies, since astronomers have found almost no metals when observing it. Chiti and his team were investigating stars in Tucana II, hoping to find a population of even older stars.

To their surprise, they detected nine new stars quite far from the center of Tucana II.

Data collected by the European Gaia satellite confirmed their results. Those stars far from the core of the dwarf galaxy were gravitationally bound.

Yet the previously estimated mass of Tucana II is not enough to produce such a strong gravitational force. This means there must be a large amount of mass that we cannot see directly, which is the dark matter.

While it is unclear so far what the dark matter is, there is a lot of observational evidence, especially via the gravitational pull of galaxies, implying that undetectable mass exists. In fact, cosmologists believe that about 85 percent of the matter in the universe is dark matter.

“Without dark matter, galaxies would just fly apart,” Chiti said. “[Dark matter] is a crucial ingredient in making a galaxy and holding it together.”

Based on the positions and movements of the stars, the team estimated that the amount of dark matter in Tucana II was in the range of 10 million solar masses. This is the first evidence that ultrafaint dwarf galaxies like Tucana II can have so much dark matter.

“This probably also means that the earliest galaxies formed in much larger dark matter halos than previously thought,” said astrophysicist Anna Frebel of MIT. “We have thought that the first galaxies were the tiniest, wimpiest galaxies. But they actually may have been several times larger than we thought, and not so tiny after all.”

However, there are more questions. When the team analyzed data from the Magellan Telescopes in Chile, they found that the stars in Tucana II had varying metallicities.

The stars were divided into two groups. The stars near the outskirts of Tucana II were three times lower in metallicity than those near the core.

This can happen if a population of stars comes from elsewhere, such as when galaxies merge.

Such a chemical difference between stars had never been seen before in an ancient galaxy. This suggests that in an early era, perhaps Tucana II was actually two galaxies that merged, combining their dark matter haloes.

“We may be seeing the first signature of galactic cannibalism,” Frebel said. “One galaxy may have eaten one of its slightly smaller, more primitive neighbors, that then spilled all its stars into the outskirts.”

The team plans to extend their techniques to more stars and galaxies.

“There are likely many more systems, perhaps all of them, that have these stars blinking in their outskirts,” Frebel said.

The research has been published in Nature Astronomy.