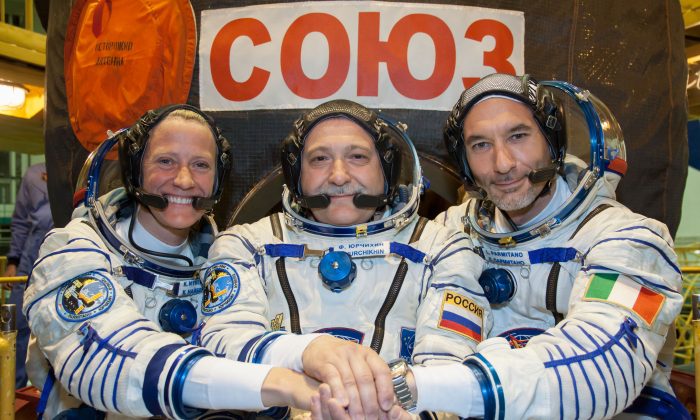 In the Integration Facility at the Baikonur Cosmodrome in Kazakhstan, Expedition 36/37 Flight Engineer Karen Nyberg of NASA (left), Soyuz Commander Fyodor Yurchikhin (center) and Flight Engineer Luca Parmitano of the European Space Agency (right) pose for pictures during a suited dress rehearsal “fit check” exercise May 17. The trio will launch May 29, Kazakh time (May 28 EDT), in their Soyuz TMA-09M spacecraft to begin a 5 ½ month mission on the International Space Station. (NASA/Victor Zelentsov)
Science

Astronauts Preparing for Trip to Space

Three astronauts will launch into space on May 28, headed to the International Space Station.

The three are two men, a Russian and a European, and an American woman.

The trip will launch around 4:31 EDT and land at the station about six hours later. The three astronauts will join three others who are already there.

So how do these three astronauts feel about the upcoming trip, which includes a stay through November at the orbiting station? And what will they be doing there?

Nyberg stopped at the station once, but only for 14 days, so she is looking forward to the longer stay. She’s excited about the window that has been put in at the station since she was there, enabling astronauts to take stunning pictures of Earth.

“The Cupola, it is our window to the Earth and I cannot wait to see that,” said Nyberg. “I am sure it will astound me even though I have seen the Earth from that distance before.”

Scientific experiments are the main focus of the international station, and Nyberg said one of the areas they’ll be focused on is examining the impact of no gravity on eyesight, since quite a few astronauts have been coming back to Earth with decay in their eyesight.

“It’s not known exactly at this time what causes this, but it’s an important thing, especially if we’re going to be spending longer and longer times—will it get worse as the time goes on? So they’re really starting to do a lot of experiments with us, taking images of the retina, taking pressures, getting eyesight checks throughout the mission,” she said.

Another area where zero gravity makes a big impact is bone density–astronauts lose bone density quickly, even faster than, say, a 70-year-old woman with osteoporosis. Nyberg said that while studying how to mitigate the bone density loss, “there’s great potential for using that and applying it to earthbound osteoporosis.”

As for her personal motivation for taking risks to fly into space, Nyberg said that it is based on human nature, because humans are very curious people.

“Human beings like challenges and this is an ultimate challenge,” she said. “A lot of it also has to do with it being an exciting thing. We talked about children, and children and adults’ alike look at spaceflight and it is interesting and exciting. If it can get the kid in school to study his or her science or math a little harder, I think that’s an important thing, and our country needs people in the sciences, math and the technology to be our leaders in the future. I think if it does that for an education purpose, I think that is a good reason to do it.”

Parmitano, from Italy, says he grew up dreaming of being an astronaut.

“I was born in 1976, so when I was about that age is the time that the very first shuttle flights were happening, and being a first and being the ’80s those were highly televised, even in Europe, even in Italy,” he said. “So I remember seeing the first astronauts floating around the space shuttle doing their job, and I think that even in a kid, small as I was, I just thought that must be the greatest job in the world to be able to do those things and call it a living.”

Parmitano said one of the most important parts of being an astronaut is to share the experience with people. He also wants people to know that astronauts in general “are very normal people,” though ones “with a fantastic privilege and opportunity to do something that is extraordinary.” He encourages young people “to never feel that it is something that they cannot reach,” whether it’s being an astronaut or something else.

Being the first Italian Space Agency astronauts to go into space for a long-duration flight is special for Parmitano, calling it “very momentous.” The research he will lead includes studying biofuels in the zero gravity environment to look for a combination that is more efficient and less polluting.

“It’s my first trip so everything for me is going to be new and I’m just looking forward to the whole experience,” he said.

Russian cosmonaut Yurchkin considers himself lucky to be flying into space, after him and many of his schoolmates paid close attention to astronauts when growing up.

“I have a lot of meetings with pupils, students, young people, to talking about space program,” he said. Yurchkin has already been in space twice, once for about two weeks in 2002 and another time for 196 days in 2007.

One of Yurchkin’s favorite experiments is when he puts sensors on his body before going to sleep, which collect data on how radiation from the station impacts the body before and after using a radiation shield, which is put up outside of the sleeping compartment. He and Alexander Misurkin, who is already at the station, will during two spacewalks in June switch aging equipment out for new equipment. They are also looking to prepare for a research module to attach to the Russian part of the station.

Yurchkin will become flight commander in September through when he, Nyberg, and Parmitano take off in November back to Earth. He said his role is to make sure the interaction between him and these two astronauts and the other three astronauts that will join them in September goes smoothly, and also to “be [a] very great friend for each of the crew.”