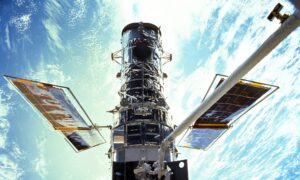 The best view of things on Earth sometimes isn’t on Earth at all.

Astronaut Jeff Williams shared a stunning photo of the Copahue volcano, which sits on the border between Chile and Argentina, from his view at the International Space Station (ISS). A stream of white smoke can be seen emerging from the crater.

Williams … is on track to become the astronaut who will spend the most days in space over the arc of an entire career.

Williams began his fourth stay on the ISS earlier this month, and is on track to become the astronaut who will spend the most days in space over the arc of an entire career, at 534 days, narrowly edging out fellow American astronaut Scott Kelly, at 520 days.

Williams has only recently started his activity on social media, and has been on a posting spree, putting up pictures ranging from the state of Michigan at night, Mount Kilimanjaro, to the Australian coast, all taken from outer space.

The unique terrain of the northwestern Australian coast. pic.twitter.com/DRLySLl8GE

A closer look at the peaks of Mount #Kilimanjarohttps://t.co/KrIrD78u9y