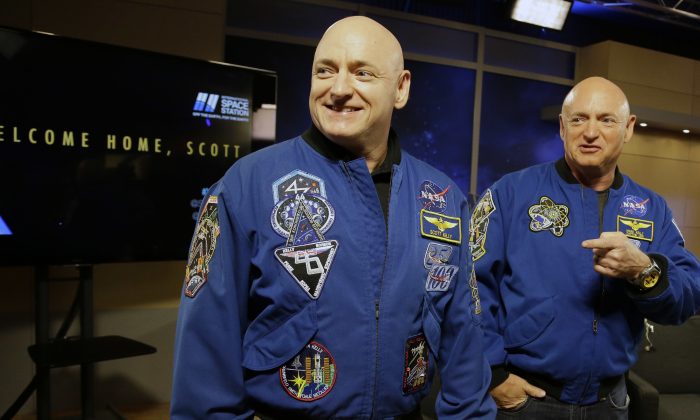 NASA astronaut Scott Kelly, left, and his twin Mark get together before a press conference Friday, March 4, 2016, in Houston. Scott Kelly set a U.S. record with his a 340-day mission to the International Space Station. (AP Photo/Pat Sullivan)
Science

Scott Kelly has returned to planet Earth after spending 340 days in space with no significant problems—a milestone for the future of deep space travel and the goal of sending humans to Mars.

“It felt like I’d lived there forever,” said Kelly, in an upbeat manner, during a NASA TV release of a press conference at NASA’s Johnson Space Center on March 4.

Kelly did admit suffering some physical afflictions after returning home. Among his symptoms are muscle soreness and fatigue, and sensitivity to touch due to having not touched anything rub on his skin for a long time.

It makes you more of an environmentalist after spending so much time looking down at our planet.
— Scott Kelly

“It’s almost like a burning feeling wherever I sit, lie or walk,” he told the audience. When asked what muscle groups were affected through his year in space, Kelly jokingly replied “most of ’em.”

Part of Kelly’s mission was to see if it is possible for a man to spend a significant amount of time in space to achieve the goal of sending a manned mission to Mars.

NASA initiated its Human Research Program with Kelly and his identical twin brother Mark, a fellow astronaut. Mark Kelly remained on Earth, living his day-to-day life in Arizona, while his brother was in Space so NASA can compare the two men.

The various tests have included blood sampling at regular intervals before, during, and now after the one-year space mission. So far, according to Kelly, they have found nothing significant other than Kelly having had a temporary two inch growth spurt whilst in space caused by an expansion of the vertebrae.

Other changes Kelly noticed being back on Earth is a difficulty judging distances with objects. “First thing I tried to throw on a table I missed. I tried to shoot some basketballs yesterday and I didn’t get any of them in the net—not that I’m a good basketball player in general anyway,” Kelly quipped.

He also discussed the culture shock of being isolated in space for such a long time then being exposed to crowds, and going from having so few choices on the space station to “basically having just about anything.”

“I don’t think it’s really hit me yet,” said Kelly.

Kelly mused about his time in space looking back at us, “The Earth is a beautiful planet. It’s practically everything to us. It’s very important for our survival and the space station is a great vantage point to observe it, to share our planet in pictures. You also notice how the atmosphere looks and how fragile it looks. It makes you more of an environmentalist after spending so much time looking down at our planet.”

On being asked about his personal feelings about spending 340 days in space Kelly said: “It really hit home for me just how if we put our mind to it, we can achieve things that would seem impossible.”

Kelly also discussed the isolation: “Trying to stay hyper focused on what you need to do and what you need to pay attention to, in an environment like that, it’s critical to your survival. I tried to have milestones that were close. … That made a difference to me in keeping my sanity”

Dr. John Holden, policy director of the White House Office of Science and Technology, also spoke upon Kelly’s arrival at the importance of mission.

“It’s gonna help us figure out how to deal with those physiological changes on the even longer missions that are ahead when we go to Mars, and we are gonna go to Mars, there is no doubt about that, we are committed to it,” Holden said.