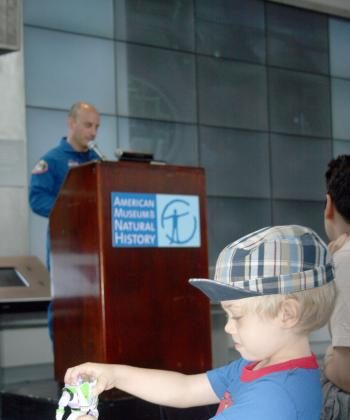 A Little boy plays with a Buzz LightYear toy as astronaut Garrett E. Reisman speaks to kids at the American Museum of Natural History on Tuesday about space travel after his three-month mission on the International Space Station. (Katy Mantyk/Epoch Times)
US

NEW YORK—Local hero, New Jersey astronaut Garrett E. Reisman, has just arrived back from 3 months in space. He was at the American Museum of Natural History’s Center for Earth and Space on Tuesday to let local children and high school students in on details of his experiences orbiting earth, and showed a video of life on board the space station, as well as scenes from his spectacular seven-hour space walk.

Question and answer time saw many eager hands shooting up to ask questions of the astronaut, some thoughtful, some intelligent, and some just cute.

“Do you believe in aliens?” asked one kid. “Ah, I didn’t see any, but that’s because they live under your bed. No really, we’re getting more and more surprised at how tenacious life is… It’s getting harder and harder to believe that we won’t find, someday soon, life on Mars, and I don’t mean little green men,” explained Reisman.

“How did you sleep?” asked a young boy. The audience laughed. “Actually, that’s a very good question,” said Reisman. Because there was no gravity in space, he would climb into a bedchamber the size of a telephone booth and sleep floating in a sleeping bag. “It was very difficult to get used to because you don’t have the pressure of lying on a mattress or a pillow on your head,” said Reisman.

“What does a violin sound like in space,” asked a young girl who had made her way up to in front of the podium to make sure she wasn’t missed. “Well, it sounds the same in the space cabin. But sometimes we lower the pressure because we had to get the nitrogen out of our blood so we don’t get something called the bends,” answered Reisman. “…And if you get really low pressure then your voice sounds really funny. And a violin, if you could get it inside your helmet, it’d have to be really small, it would sound a much higher frequency, a much higher pitch.”

Reisman said after ten years of training for space travel, it was a dream come true to take an actual space flight. “Sometimes it was easy to forget that this was real life, and not just a video game (like in training).”

“How did being in space change your views of life and the world,” one young philosopher inquired. “What changed my views more than anything else was looking out at that horizon. It changed my view in the sense that I realized that the earth is much more fragile than I thought it was. I guess it’s turned me into more of an environmentalist than I had been,” said the New Jersey born spaceman.

High school students at the museum’s in house summer science program also learned some fascinating things about space they never would have thought of.
“I found it amazing when he explained how thin our atmosphere is, because here on earth we think that the earth is so vast, but actually we’re just like a tiny particle in the whole universe. That was amazing,” gushed 16-year-old Emi Cerma.