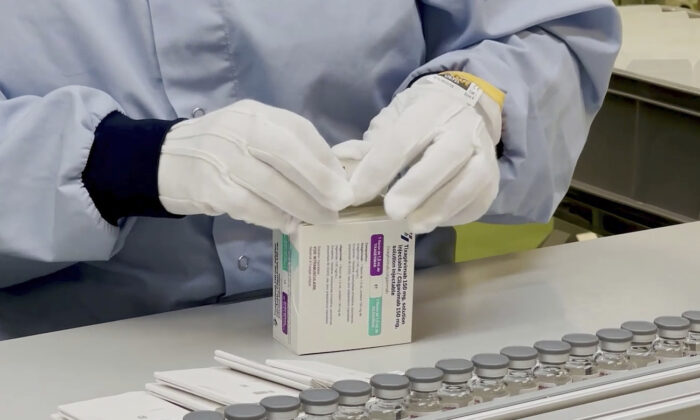 A worker packages the AstraZeneca’s Evusheld medication in an undated video. (AstraZeneca via AP)
AMERICA

A COVID-19 drug made by AstraZeneca did nearly as well against subvariants of the Omicron virus variant as the main variant, according to a new study.

Researchers with AstraZeneca, the Washington University School of Medicine, and other institutions used mice to test the monoclonal antibody combination, known as Evusheld, and a drug made by Vir Biotechnology, against the subvariants which have been increasing in prevalence in the United States.

They found small reductions in neutralizing activity for AstraZeneca’s drug but concluded the treatment retained much of its potency.

The study was published as a preprint.

“The findings demonstrate that Evusheld was effective at protecting against infection in the lungs, a critical disease site for severe COVID-19, across all Omicron subvariants tested,” Dr. Michael Diamond, one of the researchers, said in a statement released by AstraZeneca.

The findings “further support Evusheld as a potential important option to help protect vulnerable patients such as the immunocompromised who could face poor outcomes if they were to become infected with COVID-19,” John Perez, a senior vice president at AstraZeneca, added.

Evusheld was granted emergency use authorization for pre-exposure use by U.S. regulators in December 2021.

A previous study from French researchers released ahead of peer review indicated Evusheld retained activity against BA.2, an Omicron subvariant, and the U.S. Food and Drug Administration has said it performed tests that found Evusheld neutralized BA.2.

On the other hand, regulators in February recommended a higher dosing because of concerns over Omicron subvariants.

Omicron is a variant of the CCP (Chinese Communist Party) virus, which causes COVID-19 and is also known as SARS-CoV-2.

The new research, which also involved scientists from Vir, was funded by the National Institutes of Health and the U.S. military.

Researchers said the testing also found indications that Vir’s drug, sotrovimab, which is developed with GlaxoSmithKline, “can limit inflammation in the lung caused by Omicron variants” and can neutralize BA 1.1, one of the subvariants, but performs less well against BA.2.

Vir and its partner said in February data from pseudovirus and pharmacokinetic testing suggested its drug protected against BA.2.

Sotrovimab was cleared in October 2021 for treating COVID-19 patients with mild to moderate COVID-19.

Several other monoclonal antibodies, including ones developed by Regeneron and Eli Lilly, have retained little effect against Omicron and its subvariants.

However, Lilly later received emergency clearance for a different treatment, bebtelovimab, after emerging data suggested it worked well against Omicron.

According to data from the federal government, BA.2 caused about 7 percent of COVID-19 cases in the United States in the week ending Feb. 26. The B.1.1 subvariant was pegged as causing about 18 percent of cases, while the original Omicron was believed to cause virtually all of the other cases.