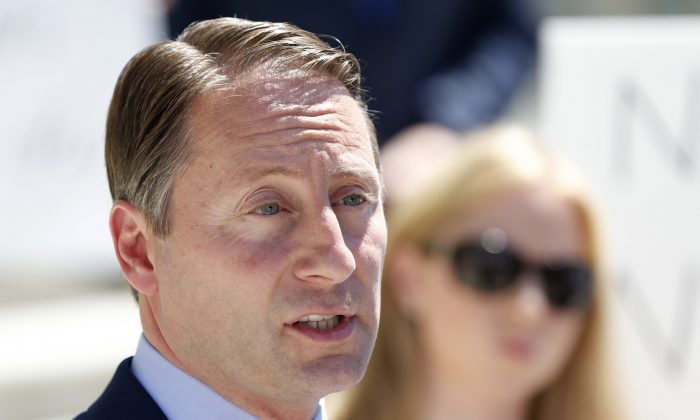 NEW YORK—Rob Astorino brimmed with confidence during his stop at the Brooklyn’s Young Republican Club.

“Tell Cuomo’s supporters that election-day is Wednesday, you tell them Obama said so,” he said; his speech was peppered with jokes throughout.

Astorino is running to unseat incumbent Gov. Cuomo in November’s gubernatorial election. A Siena poll released in June gave Cuomo a 36-point lead over Astorino, 57 to 21, in favorability ratings.

Despite these figures, the twice Westchester County Executive remains undaunted.

“The first stage was laughter,” he said, recounting his 2009 successful run in Westchester. “I was down 30 points in the summer of 2009.”

By January, Gov. Cuomo had a campaign war chest of $33 million, dwarfing Astorino’s single million. Campaign finance reports will be filed and updated on July 15.

Astorino’s speech was infused with traditional Republican rhetoric throughout. He highlighted wasteful spending in Albany, attacked New York State Assemblyman Sheldon Silver for spending hundreds of thousands to defend a fellow Democrat assemblyman accused of sexually harassing aides, and lamented that New York residents were fleeing the state due to high taxes.

“I was talking to the North Carolina governor he said ‘y’all gotta stop sending your residents to North Carolina, they’re starting to change our accents,'” Astorino told the crowd.

Astorino also said that a multicultural coalition would bring him victory, pointing to the demographics of his voters in Westchester County.

“It’s the fourth most diverse county in New York, 22 percent are Hispanic,” he said, “Eighth largest Jewish county in America, and we have a growing Indian and Asian population. We look like New York.”

Astorino attributed his 2009 victory in part to his outreach to minority voters, and said that he won 25 percent of the African American vote and a majority of the Hispanic vote.

“I spent a lot of time in non-traditional republican areas, areas that are overwhelmingly African American, and talked to property owners, to businesses, spent time in Baptist churches,” he said. “I did the same thing in the Latino areas.”

He also boasted of his past successful courting of traditionally liberal voters.

“We won Scarsdale and New Castle, which are overwhelmingly Jewish and liberal, for the first time in a generation,” he said.

Astorino exhorted the members of the club to help him in his campaign efforts.

“We only need to win by five points more than Joe Lhota in New York City to win this election,” Astorino said, “that’s very doable.”