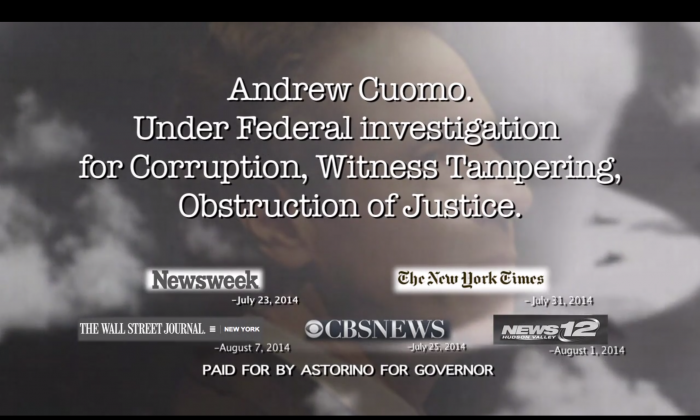 Screenshot of the attack ad on Cuomo from the Astorino Campaign: "Jail".
New York

The 30-second black-and-white ad, “Jail,” pays homage to the famous “Daisy” ad used by Lyndon Johnson against Barry Goldwater in the 1964 presidential election, copying the setup of a small girl counting the buds she’s pulling from a daisy seguing into a countdown to the explosion of an atom bomb.

The original ad alluded to, but didn’t mention, rhetoric from Gold, which suggested that he would be willing to deploy atomic weapons against the Soviet Union, whereas Astorino’s ad directly referenced U.S. Attorney Preet Bharara’s federal investigation of the Cuomo administration’s interference with the now-defunct Moreland Commission.

A translucent image of Cuomo’s face hovers over a clip of an atomic explosion and subsequent mushroom cloud and is followed by a message across the screen: “Andrew Cuomo under federal investigation for corruption, witness tampering, obstruction of justice,” synced with a voiceover that says “These are the stakes. Do we reelect a governor that may end up in jail?”

Like the original “Daisy” ad, “Jail” will only be aired once.

“This is not an ad you need to see twice,” said Astorino’s spokeswoman Jessica Proud.

“Jail” is not the first time Astorino has placed an unconventional TV ad in his bid to unseat Cuomo. Two weeks prior, in response to an ad by Erie County Democrats attacking him for being a fan of the Miami Dolphins, a football team from outside of New York, Astorino ran a tongue-in-cheek TV ad accusing Cuomo of being “a monster” who once killed Humpty-Dumpty, a unicorn, and even imprisoned Santa Claus.

“If Andrew Cuomo can make up stories about Rob Astorino, two can play that game,” a voiceover said at the end of the ad, which featured the same child pulling the daisy buds in “Jail.”

The ads appear to have little effect on the election, as Astorino has failed to break Cuomo’s lead in the polls. A Marist College poll released last Wednesday gave Cuomo a 25-point lead over Astorino, changing little from the month before.

“The race for governor is all about Cuomo. Cuomo’s supporters are voting for him, and Astorino’s backers are voting against the governor,” says Dr. Lee M. Miringoff, Director of The Marist College Institute for Public Opinion.

“The bottom line is Cuomo has a strong lead, and Astorino is still struggling to get traction.”