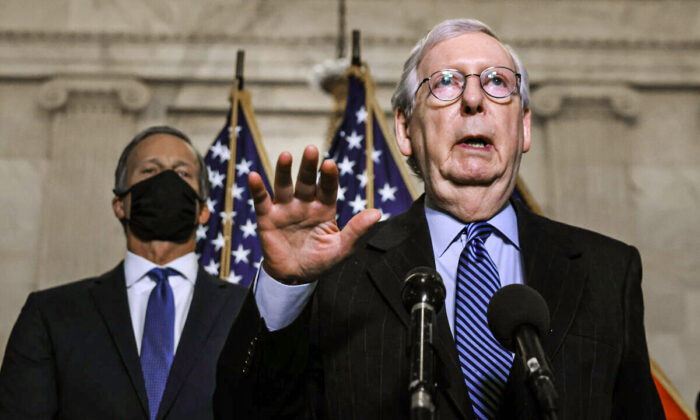 “President Biden’s student loan socialism is a slap in the face to every family who sacrificed to save for college, every graduate who paid their debt, and every American who chose a certain career path or volunteered to serve in our Armed Forces in order to avoid taking on debt,” McConnell said in a Wednesday statement.

Biden officially announced that his administration will wipe out up to $10,000 in federal student loan debt for individual borrowers making less than $125,000 a year or married couples earning less than $250,000 per year. Pell Grants recipients could qualify for a maxim of $20,000 in debt cancellation.​​

McConnell accused the policy of being a giveaway to those “earning six figures,” yet failing to save working Americans swamped in skyrocketing inflation and struggling to pay their everyday bills.

A 2020 study by Brookings Institution states that 40 percent of the highest-income households owed close to 60 percent of the outstanding education debt and made nearly three-quarters of the payments.

“President Biden’s inflation is crushing working families, and his answer is to give away even more government money to elites with higher salaries. Democrats are literally using working Americans’ money to try to buy themselves some enthusiasm from their political base,” McConnell added.

Biden also again extended the years-long student loan payment freeze, putting “one final” pause on the federal loan repayments and interest accrual, pushing back a deadline that was set to expire at the end of this month to next January.

The president said via Twitter on Wednesday that the latest move is to give working and middle-class families “breathing room” as they prepare to resume federal student loan payments.

Former Treasury Secretary Larry Summers on Monday cautioned Biden over the “unreasonably generous student loan relief,” which could add to inflation macroeconomically while encouraging college tuition increases in the meanwhile.

“If relief is to be given it should not set any precedent,” Summers wrote on Twitter. “It should only be given for the first few thousand dollars of debt, and for those with genuinely middle class incomes,” he said.