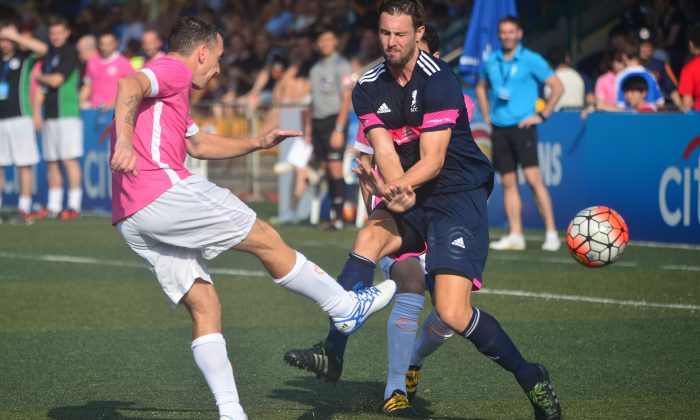 Clear and away: Yau Yee League defender (in pink) kicks the ball out of the area before Singapore Cricket Club winger can get a chance of a strike at goal during their Masters Group B match, in the HKFC Citi Soccer Sevens 2016 at Sports Road on Saturday May 21. (Eddie So)
HK Football

HONG KONG—Aston Villa overcame adversity to lift a sixth HKFC Citi Soccer Sevens title with a 2-0 triumph over West Ham in a gritty final at the Hong Kong Football Club, played in front of a full house last Sunday May 22, 2016.

Making the victory all that more sweet was the heroics of Mitch Clark, who stepped into the role for Villa’s regular keeper Matija Sarkic after he was stretchered off with a dislocated shoulder during a block leaving the lanky Under-19 goalkeeper clutching his shoulder and sprawling on the ground in pain and agony.

His replacement, Clark, normally a defender and who plays for his side’s U-17 team saw Sarkic stretchered off to the hospital for medical attention and just as quickly got down to the role.

“I didn’t have much time to think about it;” said Clark, who started with blocking two fine strikes denying the Hammers, who were making their second finals appearance in consecutive years.

“It’s a great feeling to win the HK7s and the injury to Matija made us even more determined,” said Clark, who admitted that ‘there were a couple of scary moments but I enjoyed the challenge!

Ben Petty, Villa’s Under-18 manager was not put off by the untimely injury but was well pleased with how his charges rallied behind their injured custodian and fought back to earn the championship trophy in Sarkic’s honour, with Petty likely to see his goalkeeper out of action for the next six to eight weeks but with the league about to go into its summer hiatus, the injury could not have come at a better time.

“We hope to get Matija back for pre-season, its going to be a big miss but it will be alright as we are going for a break and I am sure he will be back with us once he fully recovers,” said Petty.

In preparing for the tournament, Petty said they had to endure their fair share of headaches to come up with the perfect training methods to arrive in Hong Kong in the best possible shape as they came here on a plan and mission was accomplished: including winning a sixth title, Player of the Tournament in Khalid Abdo and leading scorer on six goals – Harry McKirdy.

“When you come into a different environment and a different playing surface. I am delighted with their performance, especially as we have only conceded one goal in the entire tournament,” he said.

West Ham, having reached two consecutive finals in this tournament are looking to doing better in the future with their Under-18s coach Mark Phillips can attest.

“I think in this format (seven-a-side) of football it’s so important to take your chances and before Villa scored, we had an absolute gilt-edged chance to go one nil up and had this had happened, the face of the game completely changes,’ said Phillips, who hopes to be a winning team.

“Granted Villa took their chances well and they certainly deserved to win,” he said, who was especially pleased that his boys did not score from the misfortunes of their opponent’s keeper.

Despite the fact the Irons had a golden opportunity with the Villa keeper sprawled on the ground clutching his injured shouldered in agony and an empty goal to contend with, the Hammer coach was glad his boys did the right thing and not scored.

“Not really, I am really pleased with the sportsmanship of my players, they could have put the ball away with the keeper down on the ground but they didn’t and that did not change the game, we had our chances but we just did not take them on the day,” he said.

Reflecting on his second final defeat in a row, the coach said they had learned a lot and needed to push the envelop if they wanted to leave Hong Kong with a trophy.

“When we came here and lost again in the final and what we learned was the two Ps – Patience and Possession. There are times when you can counter-attack when you are two on one or three on two but on the whole it’s about patience and the possession,” he said, who claimed he might be 90 when West Ham eventually wins.