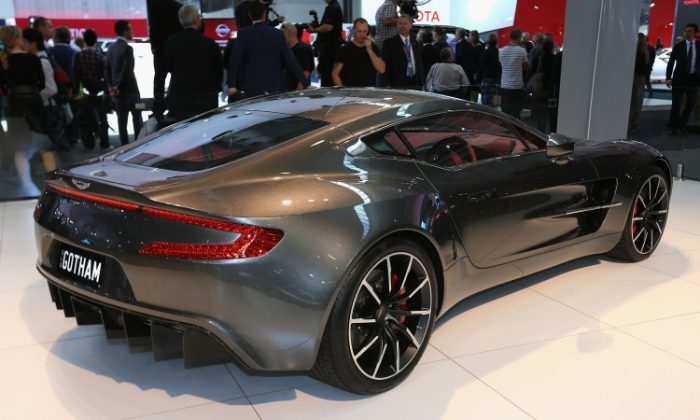 The Aston Martin One77 is displayed during a media event at the Australian International Motor Show in Sydney, Australia, on Oct. 18. The iconic British car maker has recently sold a 37.5 percent stake to Italian private equity fund Investindustrial. (Cameron Spencer/Getty Images)
Business & Economy

“I am delighted that Investindustrial has decided to become a major investor in Aston Martin,” said David Richards, Aston Martin’s Chairman. “Investindustrial’s new investment reflects and sustains the unique position of Aston Martin within the industry. With this partnership and the continued commitment of The Investment Dar, we look forward to working with our shareholders as we realize our vision and exciting future plans.”

Being well-known and fancy doesn’t guarantee profits nowadays—Aston Martin has had a row of unsuccessful financial years, resulting in being downgraded to junk level by Moody’s Investors Service. This year its UK sales have dropped by 13 percent compared to last year, as the company has sold only 738 vehicles.

Investindustrial has agreed to pay $217 million—a sum high enough to drive away competition from the Indian motor group Mahindra & Mahindra who was also eager to buy.

The cash infusion from Investindustrial comes at the right time for Aston Martin which is currently valued at $1.2 billion. In the next five years the company plans to spend more than a billion dollars to invest into developing new models and technology.

Investindustrial, headed by Mr. Andrea Bonomi, one of the most powerful and influential families in Italy, is known for purchasing out of shape marques and rejuvenating them. It tripled its return on Ducati motorcycle brand this year after it sold it to Volkswagen for 1.1 billion euros ($1.4 billion).

“We are delighted to form part of this iconic global, but quintessentially British brand,” Mr. Bonomi, the Senior Principal of Investindustrial, said. “We are looking forward to working with the management and Investment Dar to achieve a similar transformation and rejuvenation that we achieved with Ducati, by expanding the model range and strengthening the dealership network throughout the world.”

Aston Martin is a luxury sport car maker, selling its latest models such as Vanquish, with a list price of $300,000. It currently has 146 dealers in 41 countries worldwide.