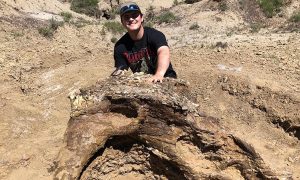 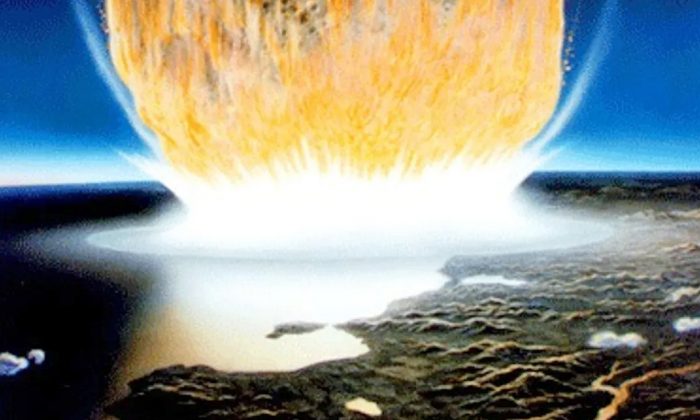 An artist’s interpretation of the asteroid impact that wiped out all non-avian dinosaurs. (Don Davis/NASA)
archaeology

Asteroid That Killed the Dinosaurs Caused a Tsunami That Dumped Tons of Rocks, Say Researchers

Researchers have revealed new evidence suggesting what happened on the day the dinosaurs went extinct.

A new study led by the University of Texas Institute for Geophysics (UTIG) at Austin found the asteroid that killed the dinosaurs 66 million years ago created massive tidal waves that shifted hundreds of feet of rocks into the impact crater it left behind.

UTIG Research Professor Sean Gulick estimates it only took 24 hours before the crater was filled with about 425 feet of material from the nearby Gulf of Mexico, making it the highest ever amount of rock moved in geological history.

“It’s an expanded record of events that we were able to recover from within ground zero,” Gulick said in a statement on Sept. 9. “It tells us about impact processes from an eyewitness location.”

“A New Timeline of the Day the Dinosaurs Began to Die Out” – NYT’s take on @SeanGulick, @glchristeson and co’s new study of the Chicxulub rocks https://t.co/2Hjz5xi6ee

In 2016, his International Ocean Discovery Program scientific drilling mission retrieved bits of charcoal, sand, jumbles of rock, and a chemical biomarker associated with soil fungi off the shore of the Yucatan Peninsula, 770 miles east of Mexico City. This suggests the charred landscape was pulled into the crater with receding waters of tsunamis.

There was strangely no sulfur in the many melted and broken specimens of sandstone, limestone, and granite, even though the area usually has a high concentration of rocks containing sulfur. Gulick’s team of more than 24 scientists suggests the impact vaporized these rocks and released at least 325 billion metric tons of sulfate aerosols into the atmosphere that reflected sunlight away from the surface, causing cooling on a global scale.

New research led by @SeanGulick of @UTGeophysics tracks the first 24-hours of the extinction of the dinosaurs and finds evidence for what did them in on the global level: https://t.co/0seTCdzb9w pic.twitter.com/JPSIC5LWul

In comparison sulfur released into the atmosphere during the 1883 eruption of the Krakatoa Volcano in Indonesia was only a quarter of the size and still cooled the Earth’s climate by an average of 2.2 degrees Fahrenheit for five years.

The team estimates the asteroid delivered the equivalent of 10 billion atomic bombs that killed 75 percent of life on Earth. The resulting wildfires, tsunamis that reached as far inland as Illinois, and concentration of sulfur released into the atmosphere worldwide was so great it blocked the sun and eventually caused a global Ice Age.

“We fried them and then we froze them,” Gulick said. “Not all the dinosaurs died that day but many dinosaurs did.”

He revealed the mass extinction of dinosaurs was more of a product of global cooling rather than simply the asteroid impact.

“The real killer has got to be atmospheric,” Gulick said. “The only way you get a global mass extinction like this is an atmospheric effect.”

The research team received funding from the National Science Foundation and other support organizations.

UTIG’s Sean Gulick is on @KUT at 10 a.m. CDT this morning about upcoming research project to core into crater of dinosaur-killing asteroid.