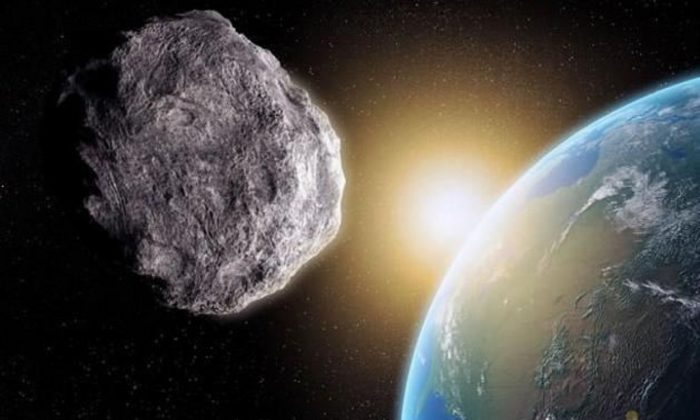 An artist's work shows an asteroid near Earth. (NASA)
Space

Scientists were surprised after an asteroid almost hit earth on Thursday, July 25.

“[If it hit Earth] it makes the bang of a very large nuclear weapon–a very large one,” he said.

One day a similar #Asteroid2019OK will not miss. Have a great weekend. pic.twitter.com/M1tlhPzwwt

The rock dubbed Asteroid 2019 OK was approximately 328 feet (100 meters) in diameter and moving at a speed of almost 28 miles (45 kilometers) per second. The rock missed Planet Earth by a distance of approximately 45,000 miles (72,500 kilometers) which is less than the distance between the earth and the moon, reported Astronomy Magazine.

The rock was flying from the direction of the sun, which is why astronomers failed to detect it, said Brown.

“It was faint, it was close to the sun. It’s been getting closer to us, getting brighter and brighter, and finally, some smaller telescopes have picked it up. Literally, right about now, it’s about 70,000 kilometers (45,000 miles) from Earth,” he said.

Did you know #Earth had a near-miss incident with a large #asteroid this week? #Asteroid2019OK is called a “City-Killer.” Read more here: https://t.co/uRUwXRRQ0o pic.twitter.com/PHiRHdS2WR

Scientists were surprised by the discovery because they had no idea it was moving in our direction. Astroid 2019 OK, also called “City-Killer” is the biggest asteroid to be observed in 2019 so far, according to Astronomy Magazine.

The Herald reported the rock was first detected at the SONEAR Observatory in Oliveira, Brazil, on Wednesday, July 24, 2019.

Other reports said that the asteroid genuinely posed a threat to humanity.

“It would have hit with over 30 times the energy of the atomic blast at Hiroshima,” Swinburne University astronomer Associate Professor Alan Duffy told The Sydney Morning Herald.

Speaking of asteroids, many thousands (millions?) are known, and the vast majority of them will never come close to Earth. In our data from last night, we have ~2,700 detections of known asteroids, bright and faint – we have to filter them out to discover new transients. pic.twitter.com/O5k5cxeJ2w

Few asteroids in the past have caused damage as powerful as nuclear explosions. On June 30, 1908, a forest in Russia was flattened by 2,000 square kilometers, according to science journal Nature. The blast over the sky near the Podkamennaya Tunguska river was caused by a meteor.

Also in Russia, an asteroid that exploded over the city of Chelyabinsk on Feb. 15, 2013, injured 1,200 people, according to Space.com. The blast was more powerful than a nuclear explosion and was detected from as far as Antartica.

This is the video of the close encounter of Asteroid 2019 OK we have been Twitting all day with the Earth: https://t.co/bjT7uhQJuO pic.twitter.com/3e4UyPcdPl

After the Chelyabinsk meteor, NASA set up a Planetary Defense Coordination Office, whose work is to “manage its ongoing mission of planetary defense,” according to the NASA website.

‘The PDCO is responsible for providing timely and accurate information to the government, the media, and the public on close approaches to Earth by potentially hazardous objects (PHOs) and any potential for impact,” the website says.