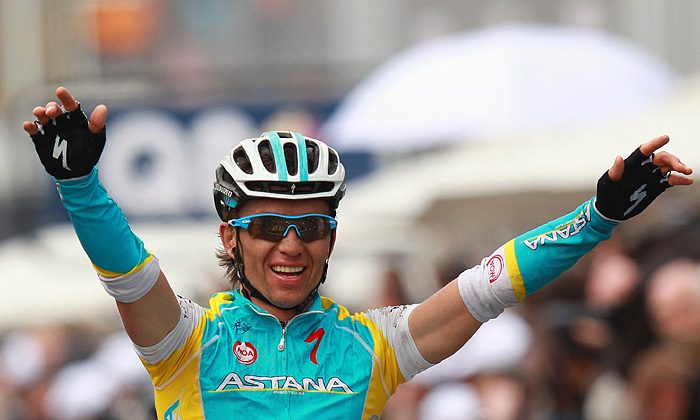 Philippe Gilbert of BMC (C, red and black kit, yellow helmet) rides in the peloton up a hill on the way to Bastogne during the 98th Liege-Bastogne-Liege cycling race. (Bryn Lennon/Getty Images)
Cycling

Nibali made a brave attack on the descent of the Côte de La Roche aux Faucons, 20 km from the finish line, and very nearly pulled off the win; Iglinksky, who launched his own attack 10 km out, caught the Liquigas rider 1300 meters from the finish line. Nibali, spent from his efforts, struggled to salvage second place while the Astana rider cruised to victory.

“I have raced Liège seven times and I have finally won,” Iglinsky told velonews.com. “It was a surprise that I could catch Nibali. I could see he was suffering and I attacked him because I could see he was finished. I just buried myself and I won.”

“It’s the biggest win of my career,” he continued. “[Teammate Alexander Vinokourov] called me this morning and told me I could win this race, but that I had to try and get into a breakaway.”

Astana’s Enrico Gasparotto, who won the first of the Classics, Amstel Gold, on Monday, finished third in Liege, outsprinting the rest of the chase group which struggled and failed to catch Nibali and Iglinskiy.

Joaquim Rodriguez of Katusha, who won Flèche-Wallonnne Wednesday and really wanted the double win, attacked with Iglinskiy halfway between the final climbs but couldn’t hang on up the slopes of the very steep Côte de Saint-Nicolas. He finished 15th.

BMC’s Philippe Gilbert, who won all there Ardennes Classics in 2011, struggled on the final climb and ended up 16th.

Next: Long, Hard, Cold and Wet